Troubled Japanese electronics giant Sharp Corp is expected to announce thousands of job cuts on the back of a fiscal year loss of around ¥200 billion ($1.68 billion), as part of its three-year plan to keep the company afloat. 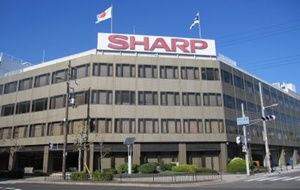 The Osaka-based company is poised for its third annual loss in four years, which is over six times more than the ¥30 billion earlier anticipated.

The electronics firm, a leading supplier to Apple Inc and also other smartphone and tablet makers, has been exploring possibilities for fundamental structural reforms, including its LCD business.

According to a Nikkei business daily report today, the struggling firm is likely to shed altogether around 6,000 jobs, or about 10 per cent of its global workforce.

About 3,500 workers in Japan will be asked to leave via an early retirement plan in the first half of fiscal 2015. This is about 500 more than originally planned. The company also plans to slash its overseas workforce by about 2,500.

By implementing its restructuring plan, the company aims to retain top talent, which will involve re-examining and unifying management pay scales.

A new pay system that better reflects job description and performance will be introduced as part of the reforms which will enable talented workers to raise in the company regardless of age, country, origin or sex, and at the same time pave the way for more demotions which are rare now.

The company plans to spend about ¥10 billion for improving the in-house company information system for sound decision-making.

According to local media reports, Sharp has made a drastic capital reduction plan to ease its tax burden, although it had to alter it due to criticism from the government.

The company wanted to reduce its capital from ¥120 billion to a mere ¥100 million or less to change it into the tax category of small to medium-sized companies.

However, the capital is still expected to be reduced to ¥500 million, or over 99 per cent, an unusual move for an erstwhile blue-chip giant.

It is believed that Sharp had already obtained consents from its creditor banks for its plan as the saved taxes could be used to turn  around the struggling company. It also hopes to get a ¥200 billion rescue package from its banks.

Sharp shares plunged about 30 per cent on Monday, after the company said a pending restructuring could include capital reduction and sale of preferred shares.

Weakness of the Japanese currency, the yen, against the US dollar, has also hurt Sharp, as it makes many of its domestic appliances abroad, while the company has a big domestic market for the products.