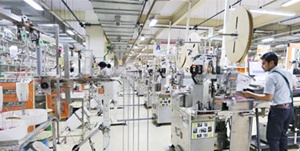 It said the takeover will help it expand its footprint significantly in the American and European commercial vehicle segment. ''We are very happy to announce that we have successfully acquired 93.75 per cent shareholding in the PKC Group, which has significant market presence in the American and European markets with major growth plans in China,'' MSSL chairman Vivek Chaand Sehgal said in a statement.

This is in sync with the company's declared policy of focusing on these overseas markets to create enhanced value for all stakeholders, including investors, he added.

MSSL and PKC had sealed an agreement under which MSSL launched a public offer for the acquisition of all the issued and outstanding share capital and voting rights of PKC Group.

The tender offer was launched on 6 February. Shareholders of PKC, which had a topline of €846 million in 2016, were offered €23.55 per share. Total consideration paid for the acquisition is around €571 million, MSSL said.

The company has also obtained all pre-closing regulatory approvals for the transaction prior to completion of the offer. ''MSSL has always believed in both organic and inorganic growth and has seen an average annualised growth of 40 per cent over the last 10 years,'' Sehgal said.

Headquartered in Helsinki, Finland, PKC is a global tier 1 supplier of wiring harness and associated components to original equipment manufacturers (OEMs) in the heavy and medium duty commercial vehicles and locomotive segments across North America, Europe, Brazil and China.

The acquisition of PKC supports MSSL in expanding its presence in the niche market of global wiring harness business for commercial vehicles. This is the 16th acquisition by MSSL since 2002. The company has set a target of achieving turnover of $18 billion by 2020 through global expansion.