ING Vysya Life Insurance today renamed itself as Exide Life Insurance Co, having got regulatory approval for the change in the wake of the exit of Netherlands-based ING Group from their joint venture. 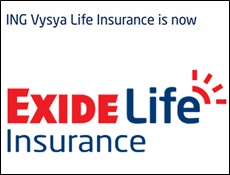 ''Exide Industries has been our major shareholder for eight years and acquired 100 per cent ownership of the company over a year back,'' Exide Life Insurance managing director Kshitij Jain said. ''We are proud to be a part of Exide's rich heritage in India.''

He added that Exide Life Insurance is a profitable company that serves over 10 lakh customers in over 200 cities across India and manages over Rs7,000 crore in assets.

In 2013-14, Exide Life Insurance recorded doubling in profits to Rs53 crore driven by growth in renewal premiums and improvements in efficiency and product mix.

Despite ''challenging market conditions'', total premium income has grown to Rs1,830 crore, while assets under management grew 13 per cent to Rs7,490 crore, he said.

The company will honour its commitments to policies issued in the name of ING Vysya Life Insurance Co, Jain said.

This comes more than a year after the ING Group exited the life insurance business in India by selling its 26-per cent stake to Exide Industries (See: Exide set to take full control of ING Vysya). The company last week received approvals from Insurance Regulatory & Development Authority (IRDA) and the ministry of corporate affairs.

Jain also said the company was not in talks with any foreign investor for divesting stake in the life insurance company. ''It will remain as a fully-owned company Exide Industries. Exide is committed to further invest and grow the business in the coming years,'' he said.

When asked if the company would come out with a public offer in the due course of time, Jain said that the company was waiting for more clarity to emerge from the insurance regulator before going for an IPO. ''It is too early to say anything on making an IPO,'' he said.

In addition to its presence in over 200 cities across the country, Exide Life Insurance will expand the presence by opening offices in nine centres in Eastern parts of the country this year. The offices would be opened in Kolkata, Asansol, Jorhat, Bihar and Odisha among others, he said.

''We are among the top five players in traditional home markets in the South and are confident that our new brand identity 'Exide Life Insurance' will help us replicate this success nationally,'' he said.

Explaining the brand positioning, Jain said, ''Advancements in the economy and healthcare have ensured that Indians are living longer than before. Life expectancy has gone up from 32 years to 68.4 years since independence. Exide Life Insurance's focus on the long term defines our mission - We help our customers prepare financially for a long and happy life.''

Since its establishment in September 2001, Exide Industries has invested Rs1,600 crore in the life insurance business. Post its acquisition of stake from ING Group in January 2013, the company infused Rs135 crore. There will be no need to make further capital infusion in 2014-15, said Uco Vegter, chief financial officer, Exide Life.