A US federal appeals court yesterday upheld a lower court's decision to block health insurance provider Anthem Inc's $54.2-billion merger deal with peer Cigna Corp on the ground that the transaction would lead to higher prices for healthcare. 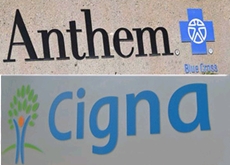 In July last year, Anthem struck a friendly deal to acquire Cigna in a bid to create the largest health-insurance company in the US. (See: Health insurers Anthem, Cigna Corp to merge in $54.2-bn deal)

Both companies have the option of pleading with the appeals court to re-consider the case or appealing with the Supreme Court.

Cigna, which wanted to end the merger, can fight to collect $1.85-billion break-up fee, as well as $13 billion in damages from the failure of the merger.

A similar deal between health insurers Aetna to buy its smaller rival Humana for about $37 billion, was blocked earlier this year by a US court on the ground that the proposed deal would "substantially lessen competition" in the sale of Medicare Advantage plans. (See: US court blocks health insurer Aetna $37-bn acquisition of Humana)

The US Justice Department (DoJ), 11 US states and the District of Columbia, medical professionals and others had opposed the Anthem-Cigna merger saying that the deal would kill competition and choice, raise premiums and reduces quality and innovation.

The federal appeals court in Washington ruled by a majority of 2 to1 that the Anthem-Cigna merger would have unacceptably reduced competition in the market.

''We hold that the district court did not abuse its discretion in enjoining the merger based on Anthem's failure to show the kind of extraordinary efficiencies necessary to offset the conceded anti-competitive effect of the merger in the fourteen Anthem states: the loss of Cigna, an innovative competitor in a highly concentrated market,'' Judge Judith Rogers wrote in the opinion.

Commenting on the appeals court ruling, deputy assistant Attorney General, Brent Snyder of the DoJ Antitrust Division said the order "confirms the district court's conclusion that the merger would not have provided real benefits to consumers, but instead would have harmed competition in these important markets."