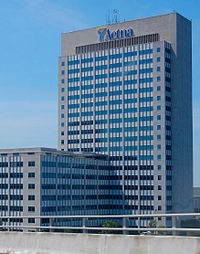 The US Justice Department (DoJ) had in July last year filed a lawsuit to not only block Aetna-Humana merger but also of Anthem's acquisition of Cigna, saying that both the deals would lead to higher prices.

Although Aetna had offered to sell a portfolio of about 290,000 Medicare Advantage members in 21 states to smaller peer Molina Healthcare Inc for $117 million, but that concession was not considered by the court,

In his ruling, Judge John Bates of the US District Court for the District of Columbia said the proposed deal would "substantially lessen competition" in the sale of Medicare Advantage plans in 364 counties in 21 states and on the Obamacare exchange in three Florida counties.

"We are disappointed by the court's ruling today. However, whatever the ultimate outcome of that litigation, we remain committed to growing our Medicare Advantage product line," Molina spokeswoman Sunny Yu said.

Aetna would now have to pay Humana a $1 billion breakup fee if the deal is abandoned.

The DoJ had challenged the deal alleging that the  mergers would harm seniors, working families and individuals, employers and doctors and other healthcare providers by limiting price competition, reducing benefits, decreasing incentives to provide innovative wellness programs and lowering the quality of care.

''Competitive insurance markets are essential to providing Americans the affordable and high-quality healthcare they deserve,'' Attorney General Loretta Lynch had said while filing the case.

The suit against Anthem alleges that the merger would substantially reduce competition for millions of consumers who receive commercial health insurance coverage from national employers throughout the US; from large-group employers in at least 35 metropolitan areas, including New York, Los Angeles, San Francisco, Denver and Indianapolis; and from public exchanges created by the Affordable Care Act in St. Louis and Denver.

Anthem, based in Indianapolis, Indiana, is the nation's second-largest health insurer and the largest member of the Blue Cross and Blue Shield Association.  It holds the Blue Cross license in 14 states and provides health insurance to 39 million people.  In 2015, Anthem reported over $79 billion in revenues.

Louisville, Kentucky-based Humana is the fifth-largest health insurer in the US operating in every state and the District of Columbia and provides health insurance to 14 million people.  In 2015, Humana reported $54 billion in revenues.