A German fund managed by Commerz Real AG (a unit of Commerzbank) today sold the landmark city headquarters of Lloyd's of London to China's second-largest insurance company, Ping An for £260 million ($388 million). 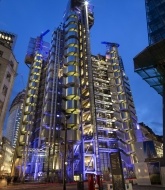 Without naming the buyer, London-based property broker Savills Plc, said in a statement, ''German Closed End Fund managed by Commerz Real, advised by Savills and CBRE, has confirmed the sale of The Lloyds Building at One Lime Street, London EC3 to China's leading insurance company, for £260 million.''

Several British media reported that the buyer is Shenzhen-based Ping An.

Commerz Real had bought the building in 2005 for £231 million, reflecting a net initial yield of 6.1 per cent.

The Lloyds Building is called the Inside-Out Building since elevators, ducts, pipes and water services, are located on the exterior of the building.

The building was designed by architect Richard Rogers and is protected under British heritage laws.

The Savills statement said that the property is leased to the Society of Lloyd's until 2031.

Roland Holschuh, the member of the management board of Commerz Real AG responsible for the real estate business, says ''We are delighted with the transaction and it has been a major success for our investors.  The current liquidity and investor demand within the London market presented an ideal time for us to seek an exit in line with our original business plan.''

Jon Crossfield, director within Savills' Central London team, said, ''This is a potentially landmark transaction, given it is the first by a Chinese Insurance company overseas.  It is a high profile and confident entry to the market for them and further illustrates the dominance of overseas investors in London at present.''