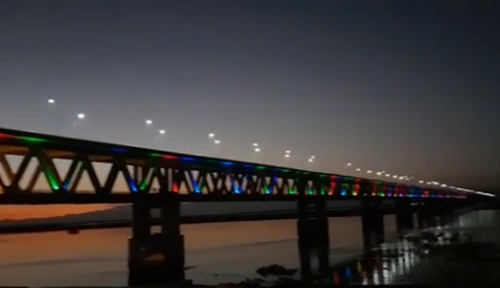 The bridge on the Bramhaputra, between Tinsukia in Assam and Naharlagun town of Arunachal Pradesh, will reduce travel time by more than 10 hours.
Prime Minister Narendra Modi will inaugurate the 4.9 km-long Bogibeel Bridge, a double-decor bridge with a rail road on the lower deck and a road bridge on the upper deck, on Tuesday.
The bridge, constructed at an estimated cost of Rs5,900 crore, reduces travel time from Assam to Arunachal Pradesh to four hours and will cut out the detour of over 170 km via Tinsukia.
The Bogibeel bridge will connect the south bank of the Brahmaputra river in Assam's Dibrugarh district with Silapathar in Dhemaji district, bordering Arunachal Pradesh. The railways has reduced the distance between Dhemaji and Dibrugarh from 500 km to 100 km with the completion of the project.
The Bogibeel bridge, India’s only fully welded bridge for which European codes and welding standards were adhered to, has a serviceable period of around 120 years, chief engineer Mohinder Singh said. He said the fully welded bridge has a low maintenance cost.
The bridge reduces travel time from Assam to Arunachal Pradesh to four hours and will reduce the detour of over 170 km via Tinsukia. It will also reduce Delhi to Dibrugarh train-travel time by about three hours to 34 hours as against 37 hours presently.
The bridge has a two-line railway track on the lower deck and a three-lane road on the top deck. For the first time in Indian Railways, the girder has steel floor system for railway tracks and concrete for road.
“Early flood in the river Brahmaputra restricted the working season to a very short period of approximately five months (from November to March) and demanded huge mobilization of construction equipment,” said Singh.
Transportation of concrete across river channels of 600 metre to 900 metre width from both the north and south banks was the biggest challenge, he said. To overcome this, concrete was pumped through pipeline laid over buoys.
“Eighty-thousand tonnes of steel plates was delivered for the project via a combination of rail and road transport, while a 1,000 tonne hydraulic jack and strand jacks linked with the substructures were used for moving steel truss over the pillars,” he said. ‘Most 2D’ automatic nesting software was used to generate efficient two-dimensional cutting plans for fabricating the steel superstructure for the bridge.
Beginning 25 December, people, especially patients from Assam Medical College located in Dibrugarh, can travel straight from the other side of the river instead of using the ferries.
The bridge is part of infrastructure projects planned by India to improve logistics along the border in Arunachal Pradesh. This includes the construction of a trans-Arunachal highway on the north bank of the Brahmaputra, and new road and rail links over the mighty river and its major tributaries such as the Dibang, Lohit, Subansiri and Kameng.
The Bogibeel bridge is also a key infrastructure for the defence of the north eastern border. "Bridging the Brahmaputra is in itself is challenging. It is a high rainfall area and falls in the seismic zone. This is a bridge which is unique in many ways. It is the longest in the country," said Pranav Jyoti Sarma, CPRO of  Northeast Frontier Railways.
Modi will also flag off Tinsukia-Naharlagun Intercity Express, which will run five days a week. The 14-coach chair-car train will depart from Tinsukia in the afternoon and leave from Naharlagun the next morning," Northeast Frontier Railway spokesperson Nripen Bhattacharya said.
MORE REPORTS