The 1960 Indus Water Treaty does not bar India from constructing hydroelectric power projects on tributaries of the Jhelum and Chenab rivers with certain restrictions, the World Bank says in its fact sheet on the treaty. 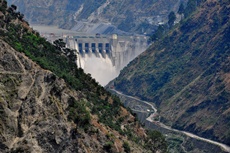 The World Bank's comments come as officials from India Pakistan concluded secretary-level talks over the IWT on Monday.

Pakistan is opposed to India's construction of the Kishanganga (330 megawatts) and Ratle (850 megawatts) hydroelectric power projects in Jammu and Kashmir.

While the IWT designates the two rivers as well as the Indus as the "Western Rivers" to which Pakistan has unrestricted use, World Bank noted that the technical design features of the two hydroelectric plants should not contravene the treaty.

"Among other uses, India is permitted to construct hydroelectric power facilities on these rivers subject to constraints specified in annexures to the treaty," the Bank said in its fact sheet.

The World Bank, however, welcomed bilateral talks between India and Pakistan over their difference on issue of India developing two power projects on River Indus and its tributary. On Monday India's Indus Water Commissioner P K Saxena revived the talks with his Pakistani counterpart Mirza Asif Beg.

After the first round on talks on technical issued ended, the two sides have decided to reconvene talks on their Indus Water treaty in September in Washington.

World Bank, which is a signatory to the treaty, said the talks were held in a spirit of goodwill and cooperation and   that the two sides have agreed to meet again in September in Washington.

''The secretary-level discussions between India and Pakistan on the technical issues on the Indus Waters Treaty took place this week in a spirit of goodwill and cooperation. The parties have agreed to continue discussions and reconvene in September in Washington, DC,'' the World Bank stated in news brief.

''The parties have agreed to continue discussions and reconvene in September in Washington, DC,'' the World Bank said in a brief statement issued at the conclusion of the Indus Waters Treaty (IWT).

Bilateral talks on the Indus Water Treaty were last held in March 2015 when the countries take up issues like India's Kishanganga and Ratle power projects.  Engagements between the two countries were halted by terror strikes by Pakistan-based militants and frequent border skirmishes.

On Monday India's Indus Water Commissioner P K Saxena revived the talks with his Pakistani counterpart Mirza Asif Beg.The two-day talks of Indus water commissioners of the two countries marked the first formal engagement between the two countries since relationship between them nosedived in September last year after an attack on an Indian military base in Kashmir.

India under the 1960 IWT is bound to hold such meetings with Pakistan. But the current meeting of the Indus water commissioners is significant as it comes after Prime Minister Narendra Modi last year threatened to revoke the water accord with Pakistan.

Commenting on the talks, Pakistan's minister for water and power Khawaja Asif welcomed the Indian decision to send its commission to Pakistan but said, ''We will defend our rights with full zeal and vigour''. ''It is a happy augury that of late India has come back to the negotiating table at the commission level to re-launch the process of peaceful talks. I am happy to announce that the process of bilateral talks has been started on the IWT following efforts by Pakistan,'' the minister said.

Pakistan had approached the World Bank last year, raising concerns over the designs of two hydroelectricity projects located in Jammu and Kashmir. It had demanded that the World Bank, which is the mediator between the two countries under the 57-year-old water distribution pact, set up a court of arbitration to look into its concerns.

India, on the other hand, had sought the appointment of a neutral expert to look into the issues, contending the concerns Pakistan raised were ''technical'' ones.

Following this, the international lender had in November 2016 initiated two simultaneous processes - for appointing neutral expert and establishment of court of arbitration to look into technical differences between the two countries in connection with the projects.

The simultaneous processes, however, were halted after India objected to it. After that, representatives of the World Bank held talks with India and Pakistan to find a way out separately.

The Indus Waters Treaty was signed in 1960 after nine years of negotiations between India and Pakistan with the help of the World Bank, which is also a signatory. The negotiations were the initiative of former World Bank President Eugene Black.

Seen as one of the most successful international treaties, it has survived frequent tensions, including conflict, and has provided a framework for irrigation and hydropower development for more than half a century. Former U.S. President Dwight Eisenhower described it as "one bright spot ... in a very depressing world picture that we see so often."

The treaty sets out a mechanism for cooperation and information exchange between the two countries regarding their use of the rivers, known as the Permanent Indus Commission, which has a commissioner from each country. The Treaty also sets forth distinct procedures to handle issues which may arise: ''questions'' are handled by the Commission; ''differences'' are to be resolved by a Neutral Expert; and ''disputes'' are to be referred to a seven-member arbitral tribunal called the ''Court of Arbitration.''  The World Bank's role in relation to ''differences'' and ''disputes'' is limited to the designation of people to fulfill certain roles when requested by either or both of the parties.