The government on Monday launched the 'Rashtriya Gokul Mission' for the preservation and conservation of indigenous cattle breeds, with an outlay of Rs500 crore, to be implemented in the ongoing 12th Five Year Plan. 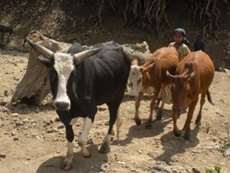 "We have about 200 million cattle. Of this, 83 per cent are indigenous. The mission aims to conserve and develop the indigenous cattle breeds in a focused and scientific manner," agriculture minister Radha Mohan Singh said.

He said, of the Rs500 crore set aside for this purpose in the current five year plan period (2012-17) under the National Programme for Bovine Breeding and Dairy Development, around Rs150 crore will be spend this year.

The minister said the mission will be implemented with the objectives to:

Under the mission, funds will be allocated for setting up of integrated indigenous cattle centres, ie, 'Gokul Grams', establishing breeder's societies called 'Gopalan Sangh', strengthening of bull mother farmers to conserve high genetic merit indigenous breeds and assisting institutes which are repositories of best germplasm among other activities.

The mission will be implemented via state implementing agencies (SIAs).

Under the mission, Gokul Grams will be set up near native breeding tracts and near metropolitan cities housing urban cattle.

The cattle centres, with a capacity to take care 1,000 cattle, will maintain milch and unproductive animals in the ratio of 60:40. Each Gokul Gram will be set up as a public-private partnership. The animals' nutritional requirements will be met through in-house fodder production programmes and the animals will be regularly screened for diseases like brucellosis and TB.

All agencies having a role in indigenous cattle development will be the ''Participating Agencies'' like CFSPTI, CCBFs, ICAR, Universities, Colleges, NGO's, Cooperative Societies and Gaushalas with best germplasm, an official statement said.

The Gokul Gram will be self sustaining and will generate economic resources from the sale of milk, organic manure, vermi-composting, urine distillates, and production of electricity from bio-gas, the minister said.

An inbuilt dispensary and artificial insemination centre will be an integral part of the Gokul Gram. Gokul Grams will also be set up near metropolitan cities for managing urban cattle and focus on genetic upgradation of urban cattle

Out of 37 recognised indigenous cattle breeds, breeds such as 'Krishna Valley" breed in Karnataka, 'Nimari' in Madhya Pradesh, 'Vechur' in Kerala, 'Punganur' in Andhra Pradesh and 'Pulikulam' in Tamil Nadu are rapidly declining in the country warranting immediate attention.

The cattle genetic resource of India is represented by 37 well recognised indigenous breeds and there are 13 recognised buffalo breeds. Indigenous cattle, in India, are robust and resilient and are particularly suited to the climate and environment of their respective breeding tracts.

They are endowed with qualities of heat tolerance, resistance to diseases and the ability to thrive under extreme climatic stress and less than optimal nutrition.

At present Indian farmers rely on several foreign cow breeds - like the Jersey-Holstein cross-breeds, black-and-white Holsteins from the Netherlands and the British Brown Jersey cow - for breeding and better milk quality.

The guidelines of the mission will be discussed in detail in a meeting of state agriculture ministers to be called on 16 September, he added.

India is the largest milk producer in the world with a 16 per cent share of global production, according to the Food and Agriculture Organisation of the UN.