Addressing a joint session of Parliament, President Ram Nath Kovind said his government has a clear mandate for continuing uninterrupted and at an accelerated pace the journey of development which started in 2014. 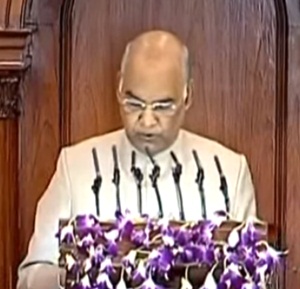 After assessing the performance of the government during the first tenure, the people have given even stronger support for the second term. “Giving the highest regard to that mandate, my government started to march forward without any discrimination with the mantra of ‘Sabka Saath- Sabka Vikas’, to create a New India, the President said.
He reminded members of his address to parliament on 31 January this year, in which he said the government from the very first day was dedicated to the goal of  improving the lives of all citizens, addressing their problems arising out of mis-governance and providing all basic amenities to the last person standing at the margins of society.
“During the last five years, the countrymen have come to believe that the government is always with them, working to improve their lives and to enhance their Ease of Living. Based on this wealth of people’s trust, a fresh mandate was sought.”
He said people of the country had to wait for long for the basic amenities of life. But now the conditions are changing. “My government wants to make the people conscious, capable, well-provided and unfettered to such an extent that they do not feel the “Burden, Force, or Absence” of the government in their daily life. Empowering every person in the country is the main goal of my government.”
The President began his address of the joint session of Parliament by congratulating the voters, newly-elected lawmakers, security forces and the Election Commission. "In this Lok Sabha more than half MPs are first-time lawmakers, the number of women MPs is at all time high at 78. This is unprecedented. It represents a New India," he said.
"In this Lok Sabha elections, more than 61 crore citizens cast their vote and set a new record. The people of India gave a clear mandate. The government is working for 'Sabka Saath, Sabka Vikas'."
Highlighting the current water crisis in the country, President Ram Nath Kovind said the government has already taken cognizance of the issue. He hailed the formation of the Jal Shakti ministry calling it a decisive step towards countering the crisis.
President Kovind further said that investment is being made to strengthen rural India, increase productivity of the agricultural sector. "Another Rs25 lakh crore will be invested in the coming years."
Highlighting women's empowerment as one of the highest priorities of the government, President Ram Nath Kovind said: "To ensure equal rights for every sidaughter in the country, eradication of practises like Triple Talaq and nikah halala is necessary. I would request all members to extend their support to these efforts to make the lives of our sisters and daughters more dignified and improved."
"Under the Prime Minister's Mudra Yojana about 19 crore loans have been given for self-employment, the scheme will now be expanded to 30 crore people," the President said.
He stresses that there will be zero tolerance for corruption. "The campaign against black money will be carried forth at a faster pace, in the last two years, 4,25,000 directors have been disqualified and 3,50,000 dubious companies have been deregistered, the President pointed out..
India has demonstrated its intentions and capabilities by first carrying out surgical strikes and then the air strikes on terrorist target across the border, following the Pulwama attack, the president said, adding, "In the future also, all possible steps will be taken to protect ourselves."
"The successful test of Mission Shakti has added a new dimension to India's space technology capability and the country's security preparedness."
In his concluding remarks, President Kovind said the need of the day is to bring in a "one nation one election system" so that the "country can grow faster".
The President also raised the issues of the National Register for Citizens. "Foreigners entering India illegally are a great threat to internal security. My government has decided that the process of the NRC will be implemented on a priority basis in areas facing the infiltration problem."
The Parliament’s Budget Session, which began on 17 June, will continue till 26 July. The Economic Survey will be presented on 4 July, followed by the Union Budget for 2019-20 on 5 July.
The Triple Talaq Bill will be introduced in the Parliament for the second time, after it was first tabled in 2017. It was rejected in the Rajya Sabha. An ordinance that made instant Triple Talaq punishable was then passed in September 2018, which also lapsed in January 2019.
MORE REPORTS