Polling will be carried out in 91 Lok Sabha constituencies across 18 states and two union territories, in the first phase of a seven-phase general elections, in the world’s largest democracy that will choose the government for the next five years and decide the fate of the country. 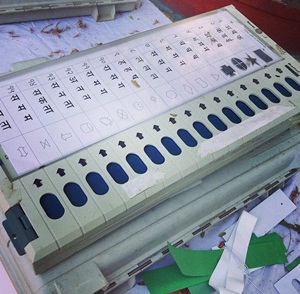 Voting is being held in parts of Assam, Bihar, Chhattisgarh, Jammu and Kashmir, Maharashtra, Manipur, Odisha, Tripura, Uttar Pradesh and West Bengal in the first phase of the general election and elections to three state assemblies of Andhra Pradesh, Sikkim and Odisha today
The states of Andhra Pradesh, Arunachal Pradesh, Meghalaya, Uttarakhand, Mizoram, Nagaland, Sikkim, Lakshadweep, Andaman and Nicobar Islands and Telangana will vote today in a single phase. Voting will also be held in parts of Assam, Bihar, Chhattisgarh, Jammu and Kashmir, Maharashtra, Manipur, Odisha, Tripura, Uttar Pradesh and West Bengal.
Voting for assembly polls will be held in Andhra Pradesh, Sikkim and Arunachal Pradesh and parts of Odisha.
Among the key leaders contesting in today’s for election are five union ministers - Nitin Gadkari (Nagpur), Kiren Rijiju (Arunachal West), General VK Singh (Ghaziabad), Satyapal Singh (Baghpat) and Mahesh Sharma (Gautam Buddha Nagar). Rashtriya Lok Dal chief Ajit Singh and his son Jayant Chaudhary are also in fray.
Voting in the election process comes at the end of months of bitter political campaign by the ruling and opposition parties.
The BJP manifesto, announced three days ahead of the election has promised to pump in around Rs20,00,000 crore into the farm sector and the rural hinterlands, lower taxes for the middle class and spend around Rs1,00,00,000 crore on infrastructure to create much-needed jobs.
PM Modi has sought another term to fulfil his promises. "I don't claim to have finished all the work. When they (Congress) cannot say so in 70 years, how can I make that claim in just five years? A lot has to be done, have potential to do a lot, and for this, there is a need for constant efforts," he told an election rally in Bihar.
Opposition Congress, on the other hand, has come up with a scheme called `NYAY’ that offers to bridge the income gap for the poor so as to ensure a monthly income of Rs12,000 per family per month.
Opinion polls show that the BJP, riding on the popularity of Prime Minister Narendra Modi, will retain power at the centre, despite opposition criticism over its handling of the economy, failure to create jobs and the crisis in the farm sector.
MORE REPORTS