The Election Commission has fully supported a Law Commission proposal to hold simultaneous elections to the Lok Sabha, state assemblies and local self governments, in a move that would help save both time and cost. 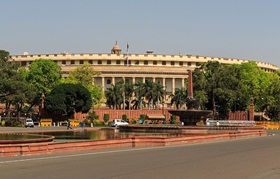 In a meeting with the Election Commission on Wednesday, the Law Commission is reported to have received full backing for its proposal for holding simultaneous elections from Lok Sabha and state assemblies to local self government bodies.
In fact, the Election Commission (EC) besides reiterating its support for holding simultaneous polls to the Lok Sabha and state assemblies, also said it is a desirable goal provided the legal and financial challenges are overcome.
Chief Election Commissioner (CEC) O P Rawat and his colleagues Sunil Arora and Ashok Lavasa are learnt to have told members of the Law Commission that simultaneous polls are a “desirable” and “achievable” goal.
The meeting was called after the Law Commission wrote to the poll panel on 24 April for its views on the proposal to align all state elections with the Lok Sabha polls.
The Law Commission was represented by Justice B S Chauhan and three other members. The Law Commission had asked for EC’s position on five constitutional issues and 15 sociopolitical and economic issues that have to be addressed before the government can gear up to hold simultaneous polls.
Although the two bodies could not deliberate on all 20 questions in detail, sources said a large part of the discussion was focused on the Model Code of Conduct (MCC) and its impact on governance when it is in force. “It seems the Law Commission, during its interaction with other stakeholders, had received the feedback that MCC disrupts government work,” a senior EC official said on conditions of anonymity.
“To this, the EC suggested that the Law Commission should not go by anecdotal evidence, but empirical evidence. The EC offered to share data of the number of MCC references received by it, and the time taken to clear the proposals for the last few elections.” Sources said the Law Commission also wanted to know whether the EC felt it was okay to amend the Constitution, especially Article 83, which defines the duration of elected Parliament, and whether this may be seen as tinkering with the basic structure of the Constitution. “The EC said this question is not for us to answer,” the official said.
The Law Commission has already brought out a “Draft working paper – Simultaneous Elections – Constitution and Legal Perspectives”, which has been sent to the Union Law Ministry. It is at present taking the opinion of all stakeholders, including political parties, on the issue and the meeting was part of that exercise.
MORE REPORTS