African heads of mission in India have strongly condemned last week's attack on Nigerian nationals in Greater Noida, calling it "xenophobic and racial in nature", and opened the possibility of taking the matter to international human rights bodies for an independent investigation if the government failed to take legal action against the perpetrators or took "sufficient or visible deterring measures" to avoid repeat of such incidents. 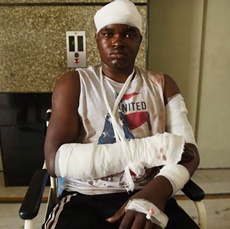 A statement issued after a meeting of the envoys - representing 54 countries on the African continent - following the incident and dated 31 March said, "As regards the recent unfortunate incident in Greater Noida, the African Heads of Mission strongly condemn the incident and express their deep concern and also take note that these reprehensible events, both outstanding and unresolved cases against Africans, were not sufficiently condemned by the Indian authorities. The meeting unanimously agreed that those re-accumulated attacks against Africans are xenophobic and racial in nature."

The attack on four Nigerian students took place on 27 March night in Greater Noida, some 40 km from the Indian capital, following protests over the death of a Class 12 student of a residential colony there due to drug overdose. Some people who were holding a candle-light vigil for the student attacked the Nigerians, suspecting them of drug-running.

The day after the incident, external affairs ministry spokesperson Gopal Baglay described it as "deplorable" and in his weekly media briefing on 30 March said, "It is clear that such criminal acts are completely unacceptable and have been condemned."

"Law enforcement authorities of the district have made arrests and a large number of people are under watch. The investigation is on and the law of the land will prevail," Baglay stated.

In their joint statement, the African heads of mission said they reviewed previous such incidents of attacks on African nationals "and concluded that no known, sufficient and visible deterring measures were taken by the Government of India".

"They equally expressed their expectations for strong condemnation from the highest political level (both nationally and locally) of the Government of India, as well expediting legal actions against the perpetrators," the statement said.

"They agreed to take further actions including the call for an independent investigation by the Human Rights Council as well as other human rights bodies, and also to comprehensively report the matter to the African Union Commission," it concluded.