Welfare at the core of govt's polices, says President

Welfare of the citizens, especially the poor, is at the core of the government's policies and in this it is guided by the `Antyodya' philosophy of Pandit Deendayal Upadhyaya and the great leaders and ancient sages of the country, President Pranab Mukherjee said while inaugurating the Budget Session of Parliament today. 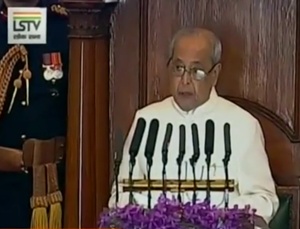 The President said the people of the country, particularly the poor, have demonstrated remarkable resilience and forbearance in the fight against black money and corruption, recently.

The same spirit has driven the LPG 'Give It Up' campaign.' Over 12 million consumers have voluntarily given up their LPG subsidy, which has helped the underprivileged in accessing LPG connections. This janashakti has transformed Swachh Bharat mission into a jan-andolan. About 1.4 lakh villages, over 450 cities, 77 districts and 3 states have declared themselves `open defecation free'.

''At the core of the government's policies is the welfare of the garib, dalit, peedit, shoshit, vanchit, kisan, shramik and yuva,'' and this, he said, is guided by the Antyodaya philosophy of Pandit Deendayal Upadhyaya. His centenary year is being observed as Garib Kalyan Varsh, he added.

The government, he said, knows well that financial inclusion is key to poverty alleviation. It is with that aim that an unprecedented 260 million plus Jan Dhan accounts have been opened for the unbanked. Over 200 million Rupay debit cards have been issued to enable cashless payments. Moving swiftly from `Jan Dhan to Jan Suraksha' close to 130 million poor have been covered under various social security schemes.

To take the banking system to the doorstep of the poor and the unbanked, the Indian Postal Payment Bank has been started. The postal network with wider reach and deep penetration of over 1.5 lakh post offices will also function as postal banks. Besides the over 1 lakh bank-mitras appointed by banks, over 2.5 lakh Gram-Dak-Sewaks will also function as banking correspondents.

Over Rs2,00,000 crore has been provided through 56 million loans sanctioned under Pradhan Mantri Mudra Yojana to ensure collateral-free bank financing for the unfunded, and to promote small businesses. Seventy per cent of this has been availed of by women entrepreneurs, he noted.

Under the Deen Dayal Antyodaya Yojana, which aims to empower women, particularly from the deprived sections, over Rs16,000 crore has been made available to self help groups in the current financial year. The scheme aims to reach out to nearly 50 million women soon.

The government, he said, has taken several initiatives to improve the quality of life of the poor through assured housing, affordable healthcare, safe drinking water and sanitation, and access to clean energy.

The government is committed to provide shelter to every houseless poor household through the Pradhan Mantri Aawas Yojana with appropriate interest subvention on housing credit.

He said the government has taken several steps to make healthcare affordable and accessible to every citizen of the country, particularly the poor. `Mission Indradhanush' commits to vaccinate ''every child everywhere'' against preventable diseases. It has so far benefited 5.5 million children.

With the objective of digitisation of all the live Kisan Credit Cards, another 30 million cards will be converted into Rupay debit cards soon. The corpus of NABARD fund has been doubled to Rs45,000 crore to ensure easy credit access to farmers.

Irrigation cover under Pradhan Mantri Krishi Sinchayee Yojana has been expanded and more than 1.27 million hectares have been brought under micro irrigation in the last two years.

The government, through active intervention, has brought down soaring prices of pulses to far lower levels and at the same time raised support prices for farmers ensuring fair price for farmers.

Citing the great strides made by women, especially those like PV Sindhu, Sakshi Malik, Deepa Karmakar and others, the President said the government is making every effort to making Nari Shakti an integral part of the development programme.

He also said the government is taking all efforts to skilling the youth and improving their employability. The work of skill development, that was earlier spread across 21 ministries and 50 departments, has been brought under one umbrella ministry. The Pradhan Mantri Kaushal Vikas Yojana has been launched with a budget outlay of Rs20,000 crore, to train 10 million youth over the next four years. Over 2 million youth have already benefited.

Besides, the National Apprenticeship Promotion Scheme has been launched with a budget outlay of Rs10,000 crore. As part of the National Career Service Portal, 978 employment exchanges spread across the country have been integrated.

The government has also opened new avenues and made higher technical education more accessible to students from economically weaker sections, the President added.