Prime Minister Narendra Modi today said the demonetisation of high-value notes were intended to purify the economy of illicit money and thanked people for their overwhelming support for the initiative. 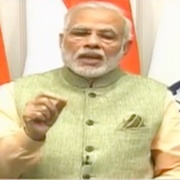 Addressing the nation on the New Year's eve, after the close of the 50-day grace period provided for scrapping of all demonetised currencies, Prime Minister Narendra Modi announced two housing loan schemes for the poor.

''In 2017, loans up to Rs9 lakh will get a rebate of 4 per cent and for Rs12 lakh 3 per cent rebate. Those who want to extend homes in rural areas will be given a rebate of 3 per cent on Rs2 lakh,'' he said in his address to the nation.

This is his second address to the nation since his announcement to scrap Rs1,000 and Rs500 notes on 8 November.

Throughout the speech, Modi was seen giving a stern message to the corrupt and appreciated the efforts of the people who went through the pains during implementation of demonetisation.

"After Diwali, our country took an important decision to curb black money which will have long term benefit," he said.

''Black money and corruption in our system had defeated the honest in the society. The days following Diwali demonstrated that people were waiting to be relieved of the 'ghutan' - the  oppression - of corruption.

"It is an example of joint operation of the government and the people," the PM said, appreciating the people's readiness to undergo hardships for a good cause.

''There is no example in the world of what India has demonstrated in these past two months,'' he said even as he explained the ill-effects of black money on the Indian economy.

''In the New Year, all efforts will be made to normalise the functioning of banks, especially in the rural areas so that problems faced by farmers and rural areas can be alleviated.

''If cash is part of the economy it becomes a part of the country's growth and all economists agree to it. If leaders like Lal Bahadur Shastri, Kamraj were there today, they would have blessed a move like demonetisation.

''As per records, only 24 lakh people in the country agree that they earn Rs10 lakh or more, which is laughable,'' Modi said.

On 8 November, PM Modi had announced that Rs500 and Rs1,000 notes will no more be legal tender. After that announcement Modi had said "...help me for 50 days and I will give you the India you desired".

The prime minister urge banks to take initiatives and launch schemes keeping in mind the poor and the middle class people.