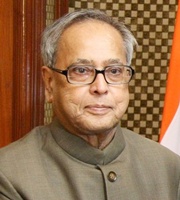 A controversial anti-terror bill, passed by the Gujarat assembly but earlier rejected by two presidents, was returned by President Pranab Mukherjee seeking additional information from the government, after which the legislation was withdrawn.

The Gujarat Control of Terrorism and Organised Crime (GCTOC) Bill, 2015, which has been hanging fire since Narendra Modi as Gujarat chief minister first introduced it in 2003, was returned by the President to the union home ministry as he sought more inputs related to certain provisions of the bill.

The Hindu reports that an official close to home minister Rajnath Singh's office said the bill was called back at the behest of the state government and it will likely be "reworked".

The controversial bill was sent to the president in September 2015 for his assent.

The bill provides for admissibility of evidence collected through interception of mobile calls of an accused or through confessions made before an investigating officer, or in a court of law.

In July last year, the Modi government at the centre had sent back the bill to the Gujarat government asking it to clarify a few issues raised by the ministry of information and technology. A provision in the bill allowed the interception of phone conversations and made them admissible as a proof in court.

The Gujarat government had strongly rebutted the objections raised by the IT ministry.

The central government has given its consent to the provision of extensions of time limit for filing of charge sheet from 90 days to 180 days after consultation with other central ministries.

The Gujarat assembly in March 2015 had passed the stringent bill retaining controversial provisions that had twice earlier led to a previous similar bill being rejected by the President. The bill was first rejected by then President A P J Abdul Kalam in 2004, demanding that the clause relating to interception of communication be removed.

It was again rejected when Pratibha Patil was the President. On both the occasions, the then UPA government recommended to the President for rejection of the bill, saying several provisions of the GCTOC were not in conformity of the central law, the Unlawful Activities (Prevention) Act.