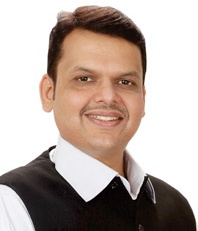 Devendra Fadnavis, who has been elected leader of the Bharatiya Janata Party's (BJP) legislative party, will be sworn in as the party's first chief minister in Maharashtra at a grand function at the Wankhade Stadium in the state capital on Friday.

Fadnavis, 44, the second-youngest to become chief minister of the state after Sharad Pawar, who was elected chief minister at the age of 38, will get 15 days to prove his government's majority in the state assembly.

Union home minister Rajnath Singh, who was the party's central observer, announced this decision after the meeting in Mumbai.

A delegation accompanied by the newly-elected leader of the BJP legislative party today met the Maharashtra governor Chennamaneni Vidyasagar Rao to stake claim to form government in the state.

On Friday evening, Prime Minister Narendra Modi will be present at the Wankhade stadium when Fadnavis and a small cabinet of ministers, all from the BJP, will take oath at a grand ceremony at 4.30 pm.

Although the BJP is 22 seats short of a majority in the 288-member assembly, its leaders seem comfortable with its government being in a minority to start with and will not rush negotiations to get the support of former ally, the Shiv Sena.

Sharad Pawar's Nationalist Congress Party, which offered the BJP unconditional support, has also said that its legislators will abstain from voting in a test of strength to help the BJP sail through.

Fadnavis is seen to have scored with a very clean image, high energy and much hard work that he has done as the BJP's Maharashtra chief. But he has superseded several senior BJP leaders in the state and has the delicate task of keeping them in good humour.

Both Fadnavis and union transport minister Nitin Gadkari were earlier seen vying for the state's top post, but Gadkari had ruled himself out after a meeting with top RSS leaders in Nagpur last week.

On Sunday, the BJP had announced that the party is willing to form the government in Maharashtra in alliance with the Shiv Sena.

The Shiv Sena also had expressed its willingness to support any person chosen by the BJP as the next chief minister of Maharashtra.

The BJP has emerged as the single-largest party in Maharashtra winning 122 of the 288 seats. The Shiv Sena finished second with 63 seats.