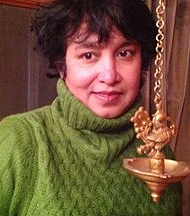 The Narendra Modi government on Monday extended the visa of controversial Bangladeshi writer Taslima Nasreen for one year. She is allowed to stay in India till August 2015.

Debarred from her own country due to her critical attitude to Islam, she has been living in exile since 1994.

The 51-year-old writer was last month given a two-month temporary visa after the new home ministry began scrutiny of her visa application.

"The writer's visa has been extended for one year, till August 2015," a home ministry official said on Monday.

Taslima had met home minister Rajnath Singh on 2 August after India's decision to grant her a two-month visa. The home minister had assured her it would consider her plea for a longer-term visa.

Nasreen had to leave Bangladesh in 1994 in the wake of death threats by fundamentalist outfits for her alleged anti-Islamic views.

She has also been hounded out of Kolkata in West Bengal, the city she has said she feels most at home in, because of her books – and that under the previous Left government in the state.

Taslima is now a citizen of Sweden, but has always said she feels most at home in India. She has been getting her Indian visa extended continually since 2004.

She has lived in the US, Europe and India in the past two decades. However, on many occasions she had expressed her wish to live in India permanently, especially in Kolkata.

The writer had to leave Kolkata in 2007 following violent street protests by a section of Muslims against her works.