A motely crowd of relatives, friends, and well-wishers gathered at Cochin airport in pouring rain as India finally managed to bring home the 46 nurses who were trapped and traumatised for a month in strife-torn Iraq. 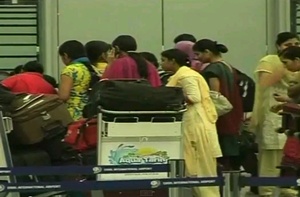 The nurses had been abducted in Iraq by Sunni militants on 9 June from a hospital in Tikrit, tha home town of Iraqui President Saddam Hussain.

Among those present was Kerala chief minister Oomen Chandy, along with a team of state officials.

There was some consternation as the special Air India plane was held up in Mumbai for several hours due to ''technical reasons'', including refuelling.

The delay was lengthened due to the hurdles faced in the operation of an unscheduled flight, with clearances required from all countries covered during the course of the flight.

With the ordeal behind them, the visibly happy nurses, some in joyful tears, embraced their parents and friends in an emotional reunion.

Chief minister Chandy grandiosely attributed their return to ''deft and meticulous diplomacy'' by the state government.

On Thuesday the ISIS militants moved the nurses against their will to the militant stronghold of Mosul, 250 km from Tikrit and were finally freed on Friday after intense diplomatic mediation (See: ISIS militants free all Indian nurses).http://www.domain-b.com/economy/general/20140704_sushma_swaraj.html

The nurses were finally moved to Erbil International airport, about 80 km from Mosul, where they boarded the special Air India plane this morning.

A joint-secretary level IFS officer and an IAS woman officer from Kerala are among three Indian officials travelling on the chartered flight.

Foreign affairs ministry spokesman Syed Akbaruddin said a "significant number of Indians were still in the conflict zone. "We are working on those... We will not leave any stone unturned in trying to get back our nationals from an extremely difficult position," he said.

Akbaruddin said, India had friends not only in Iraq but outside Iraq, who were mediating on India's behalf with the militants.

A crisis management group headed by Sushma Swaraj with support from the Intelligence Bureau, RAW and NSA, has been monitoring the situation.

5 Indian officials have been deployed in four Iraqi cities - Baghdad, Najaf, Basra and Karbala - to oversee rescue of stranded Indians.

So far, about 900 Indians had been provided air ticket to leave Iraq,  Akbaruddin said.

A total of 1,500 Indians were registered with Indian authorities to leave Iraq, though some of them had not decided whether they wanted to leave or not.