Kejriwal calls off stir against Shinde, lands in hospital 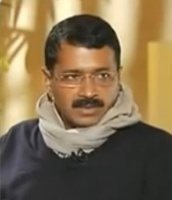 Delhi Chief Minister Arvind Kejriwal called off his unprecedented and controversial street demonstration on Tuesday night after the union home ministry made the face-saving gesture of sending on leave two of the five policemen whose ouster Kejriwal was seeking – and landed in hospital after spending the night on the street in January weather.

Kejriwal called off his ''indefinite'' protest in 33 hours, ostensibly after an appeal from Delhi Lieutenant Governor Najeeb Jung – though commentators say he may have realised that neither he nor his followers could stand another night in the Delhi chill. Kejriwal was seen coughing violently all through the protest. He has been admitted to a hospital in Ghaziabad with severe lung congestion. Medical tests are being conducted.

Meanwhile the Delhi Police have slapped a first information report or FIR against unnamed Aam Aadmi Party supporters who staged the demonstration outside Rail Bhavan in the heart of the city.

Violence had erupted on Tuesday as the police clashed with AAP supporters, some of who tried to storm through barricades and threw stones at riot police. The chief minister's sit-in also created traffic jams, forced the shutdown of major metro stations, and threatened to impede arrangements needed for the Republic Day parade on Sunday.

A bad press may also have helped persuade Kejriwal to call off his stir. Most educated observers wondered how a chief minister, who is supposed to maintain law and order, could himself lead a disruptive street protest. They also wondered who meanwhile was running the city-states, as more than half his cabinet out with him on the street.

Moreover, it has gone down poorly with the thinking classes that instead of condemning the misplaced vigilante behaviour of party workers who publicly humiliated a couple of foreign women and forced them to undergo tests for drug use (which found them to be drug-free), the chief minister instead sat in 'dharna' demanding the ouster of the policemen who refused to support the action.

In the past, several chief ministers may have overtly or covertly instigated and supported street protests by party workers, but Kejriwal is the first chief minister to lead such a protest himself.

The mainstream political parties are quietly rubbing their hands with glee as they watch Kejriwal digging his own grave, at least as far as the middle-class is concerned.

But at the same time, others point out that his demand for greater powers for the state government over the Delhi administration, including police, is not unwarranted, although his support of the vigilante action against the African women is difficult to justify.

Of all the states, the Delhi government has the least autonomy, with much of the administration, including the police, being controlled by the union government.

Kejirwal called off his demonstration after Lt Governor Jung, the centre's representative in Delhi, promised to fast-track an inquiry against policemen targeted by AAP for alleged dereliction of duty. Many see it as a face-saving formula.

Not all of AAP's demands were met. One of three station house officers that Kejriwal wanted suspended has been "sent on leave". In another case, a junior cop has been sent on leave instead of his senior, against whom the chief minister wanted action. There has been no action at all in the third case.

As he called off the strike on Tuesday evening, the chief minister said, "This is a victory of Delhi." He also warned, "If any woman of Delhi is attacked, then we will not sit quietly." He of course did not go into the paradox that he was supporting party members for attacking innocent women.

The AAP's chief spokesperson Yogendra Yadav acknowledged this morning that all their demands had not been met. But, he tweeted, "What appears to be a partial success today might prove to be a turning point in the history of Delhi's governance."  He also tweeted, "Some felt that we did not get our original demands. Nor did Gandhiji. He insisted on principles rather than concrete demands," he said.

Kejriwal and his supporters sat in protest near Rail Bhavan on Monday morning after he was stopped en route to South Block headquarters of the home ministry, where he had planned to demonstrate against union home minister Sushilkumar Shinde.

The protestors gathered in strength, finally numbering over one lakh, before the stir was called off in the evening. Throughout the protest, Kejriwal made a point of targeting Shinde.