The Comptroller & Auditor General of India (CAG) will put in place special teams on a priority basis to audit Delhi's three electricity distribution companies (discoms) following a request from the city-state's new Chief Minister Arvind Kejriwal, who has made reduction of power tariffs and an investigation of the discoms a major issue. 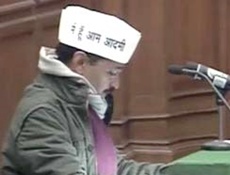 "We would take it up on a priority basis," CAG Shashi Kant Sharma The Times of India after his meeting with Kejriwal on Tuesday. The CAG said his officers are awaiting a formal reference from Delhi Lt Governor Najeeb Jung to begin the audit process.

The reference, based on Kejriwal government's recommendation, would contain the objectives and time-frame of the proposed audit. "Once the reference reaches us we will send a team of officials to assess the volume of work," a senior CAG official said, according to the ToI report.

Officials in the government accountant's office are expecting the audit period to be between 2002 and 2013. CAG sources said the audit could be completed in a few months.

Sharma said his office would constitute special audit teams to carry out the audit. "If necessary we would bring in more manpower," he said.

A senior CAG official pointed out that Tuesday's meeting between Kejriwal and Sharma, as well as a separate meeting between officials of the Delhi government's department of power and CAG representatives is the first step in the process of auditing. Such a consultation is mandatory under rules.

The CAG is empowered to audit private entities under Section 20 of the Comptroller and Auditor-General (Duties, Powers and Conditions of Service) Act, 1971, which empowers CAG to audit "accounts of anybody or authority" that has "not been entrusted to the CAG by or under any law made by Parliament". The CAG can be requested to carry out such an audit by the President, or the governor of a state or the administrator of a Union Territory.

The audit of accounts of any such body can be done based on "terms and conditions as may be agreed upon between him (CAG) and the government and shall have, for the purposes of such audit, right of access to the books and accounts of that body or authority," according to Section 20.