Ending the political uncertainty in Delhi, the Aam Admi Party today announced it would form the state government with the outside support of the Congress, with its convener Arvind Kejriwal as chief minister. The swearing-in ceremony is expected to take place on 26 December. 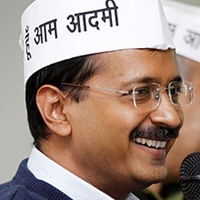 "I am going to meet the Lieutenant Governor at 12:30pm to tell him that AAP is ready to form a government in Delhi," Kejriwal told reporters after a meeting of the party's political affairs committee.

In a departure from standard procedure, Kejriwal said that he will request Lt Governor Najeeb Jung to hold the swearing-in ceremony at the public Jantar Mantar rather than in the palatial precincts of Raj Bhavan.

Party leader Manish Sisodia said that 74 per cent of the people in Delhi favoured AAP forming a government and of the 280 'jan sabhas' (public consultations) held across Delhi, 257 responded with a yes for the party.

Sisodia said that Kejriwal, under whom the party won 28 seats in the 70-member Delhi assembly, "will be the chief minister" – making him, at 45, Delhi's youngest-ever chief minister.

"We fought the elections under his leadership and it is the opinion of all the 28 MLAs that he (Kejriwal) will be chief minister (of Delhi)," said Sisodia.

Outgoing chief minister Sheila Dikshit of the Congress wished the AAP luck and hoped that the party would fulfil its promises. "We have not promised unconditional support to AAP. It is for their programmes; let's see if they deliver," she said.

Hinting that the Congress, despite its support, is hoping that the carpet will slip under the AAP's feet, Dikshit said, ''We are aware that it is impossible to fulfil those promises."

BJP's Harsh Vardhan said that the AAP has colluded with the "corrupt" Congress which was rejected by the citizens of Delhi in the elections.

"AAP's move to form government with Congress support is a compromise of its principles and betrayal of people's verdict," he said.

The 4 December elections in the city-state of Delhi National Capital Region (NCR) had resulted in a hung assembly, with the BJP emerging the largest party with 32 seats (including one seat for ally Akali Dal) and AAP winning 28, with the Congress reduced to just eight.