The United Progressive Alliance government at the centre today announced another reshuffle of the cabinet with the induction of eight new ministers and change of portfolios of some ministers. 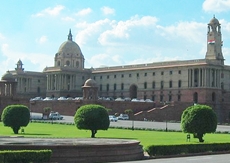 Mallikarjun Kharge has been shifted to railways and Sisram Ola has been given the labour and employment portfolio.

Oscar Fernandes gets the road and highways portfolio while Girija Vyas from election-bound Rajastan has been given the portfolio of housing, urban development and poverty alleviation.

Kavuru Sambasiva Rao from Andhra Pradesh will take over as the new minister of textiles, a portfolio currently handled by commerce and industry minister Anand Sharma.

Yesterday, two other ministers, Ajay Maken and CP Joshi had announced their resignation to facilitate the reshuffle.

The reshuffle comes a day after Congress effected a major organisational change to reflect the increased delegation of power to party vice president Rahul Gandhi.

This is the second reshuffle of the UPA ministry since October, taking the strength of the council of ministers to 77.

This could also be the last reshuffle of the UPA-II ministry with the Lok Sabha elections less than a year away.