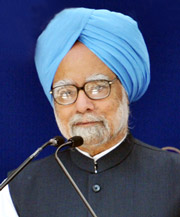 Prime Minister Manmohan Singh today said ''credible action'' is needed from all sides to ensure that the country is less affected by the ''formidable challenges'' posed by the global economic slowdown.

He sought the cooperation of all political parties ahead of Parliament's Budget session, which got under way today.

Singh said Parliament was meeting against the backdrop of a global slowdown of economic activity which has also affected the country.

''It is now a challenge for all of us to take credible action to ensure that we are least affected by this global slowdown,'' he said.

''In this context, the way we conduct the financial business now before Parliament will be a crucial determinant of our country's ability to cope with the formidable challenges our country faces.''

The Prime Minister said he looked forward to cooperation of all sections of the House. His remarks came against the backdrop of opposition parties preparing to target the government on several issues – the copter scam, price rise, and crimes against women being prominent among them.

''On our part, we wish to engage constructively, productively with all sections of the House in the expectation that there would be responsible dialogue, debate among members of Parliament,'' he said.

''We are looking forward for a very productive, constructive session of Parliament. That is what our country's people expect Parliament to do.''