Honda Motorcycle & Scooter India yesterday said it had set a new record of selling over 1 million of its flagship scooter Activa in the first five months of the current fiscal. 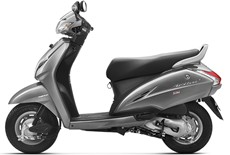 "Not just that, the Activa volume has grown 20 times that of the two-wheeler industry,'' Guleria added.

According to commentators, the numbers were interesting as the two-wheeler market as a whole had suffered de-growth all through this period.

Market leader Hero MotoCorp reported high double-digit sales contraction, as the rural markets, which had been the mainstay of two-wheeler makers had been left in distress due to poor rains and lower realisation from farm produce.

Speaking on the milestone, Keita Muramatsu, president and chief executive, Honda Motorcycles & Scooters India said, ''We are excited to have started the festive season on a high note, with Activa creating a hat-trick as the No 1 selling two-wheeler for three consecutive months.

"From reactivating the scooter segment here in 2001, our iconic Activa has slowly started market penetration.''

With the company hitting the milestone, Honda Activa had become the first two-wheeler to cross the 1 million sales mark within five months of the financial year 2015-2016 in domestic market.

The Activa had also become the largest-selling two-wheeler in the Indian market.

Analysts say, with its strong performance Activa was aggressively leading the "scooterisation" of the Indian two-wheeler industry; Activa alone contributed 51 per cent to the scooter segment.

Moreover, its sales volume had grown 20 times that of the two-wheeler industry which had remained flat so far this year in April to August, 2015.

With the addition of an incremental 1.6 lakh units sold over last year, Activa had single-handedly boosted the two-wheeler industry at a time a time of distress, especially in the key rural sector.

Speaking on this achievement, Keita Muramatsu, president and CEO, Honda Motorcycle & Scooter India Pvt Ltd. (HMSI) said, ''We are excited to have started the festive season on a high note, with Activa creating a hat-trick as the No 1 selling two-wheeler of India for three  consecutive months.

"From reactivating the scooter segment in India in 2001, Honda's iconic Activa has slowly started penetration in rural India. Further, with the improvement in rural infrastructure in future we expect that scooter contribution has the potential to go up further.''

In December 2014, the company announced plans to launch more than 10 two-wheeler models, as the company aims to further strengthen its presence in the country (See: Honda Motorcycles to launch 10 new models in India).