Apple yesterday launched its own mobile mapping service and made its enhanced Siri voice-search available for iPads to take on Google in the vehicle navigation space. 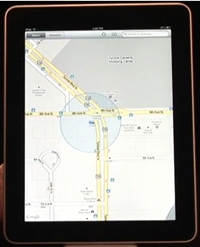 CEO Tim Cook, taking over from late co-founder Steve Jobs last August, is steering a new course with the launch of services -- such as in-house mapping and beefed-up Siri software -- to help keep at bay Google and its fast-growing Android mobile platform.

Apple's new mobile operating software -- the iOS6 -- comes with a mapping system "built from the ground up, according to software chief Scott Forstall.

Further, Siri, the innovative voice-activated iPhone search-feature users have slammed for being faulty and inadequate, now comes on iPads and comes with a larger database of answers, especially sports, restaurants and movies and is also integrated into the new mapping service.

According to executives Siri-users can also post photos with voice commands.