Balasore, Orissa: India today successfully test-fired a ship-based Prithvi ballistic missile variant, 'Dhanush', with a range of 350 km, and the land-based Prithvi-II. The missiles are capable of carrying both conventional and nuclear warheads. 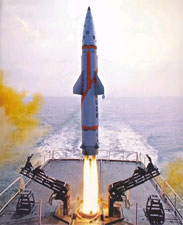 Both missiles were fired as part of user training trials for the Indian Navy and the Indian Army.

While the 'Dhanush' was fired from the INS Subhadra, in the Bay of Bengal near Puri by the Indian Navy, the 'Prithvi-II' was test-fired from a mobile launcher by the Army at the Complex-3 of ITR Chandipur, 15 km from here.

The launches were near-simultaneous with the 'Dhanush' being launched at 0544 hours and the Prithvi soon thereafter at 0548 hours.

The Subhadra is a Sukanya-class patrol vessel of the Indian Navy and, along with INS Suvarna, has been used as a test bed for installation of the Dhanush launch system. The missile is essentially a Prithvi, which is held in place by the Dhanush launch system installed on the rear-deck of a ship. The Dhanush system lifts and holds the Prithvi in position on the ship when it has to be test-fired.