Airport infrastructure in India is expected to attract investments of $12.1 billion during the 12th Plan period, including $9.3 billion from private companies, civil aviation minister Ajit Singh said at the launch of Indian Aviation 2014 in Hyderabad on Wednesday. 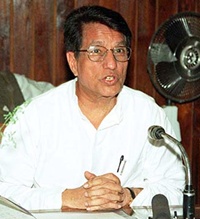 The fourth edition of the aviation show on its first day witnessed a large aircraft deal worth $4.4 billion being signed between budget carrier SpiceJet and Boeing. (See: SpiceJet orders 42 Boeing 737 MAX planes in $4.4 bn deal)

"The government has envisaged an investment of $12.1 billion in the airport sector during the 12th Plan period (2012-17), of which $9.3 billion is expected to come from the private sector for construction of new airports, expansion and modernisation of existing airports and development of low cost airports," Singh said.

While the rapidly expanding air transport network and opening of the airport infrastructure to private sector participation has fuelled the growth of air traffic in India, Singh said, "However, Indian air traffic density is low as compared to other countries."

"The domestic civil aviation industry has systematically evolved over the last 100 years of its existence. The sector is poised to handle 336 million domestic and 85 million international passengers by 2020, which will make the country the third largest aviation market. The commercial fleet size is expected to grow from 400 today to 1,000 by then," he said.

He further said that opening up of the sector to foreign carriers by allowing up to 49 per cent foreign direct investment was the biggest game-changer, resulting in two new scheduled airlines, Air Asia and Tata Asia, coming up.

Lavasa also suggested that states need to look at the tax structure of jet fuel.

The five-day expo is expected to attract more than 250 exhibitors, including Airbus, Boeing, Bombardier, Dassault and Rolls Royce. The French ambassador Francois Richier, US trade and development agency director Leocadia Zak and central and state government officials are also expected to attend.