More reports on: In the news, News reports, General - aero

Six months after Captain Amol Yadav displayed a locally built six-seater plane at the `Make In India Exhibition' in Mumbai in August last year, chief minister Devendra Fadnavis has kept his promise of 157 acres of land in Palghar, near Mumbai, to Amol Yadav to help him set up his factory for the commercial production of the aircraft. 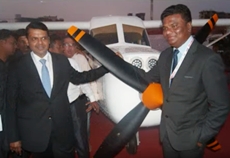 Developed by Amol Yadav on the terrace of his flat in Charkop, Mumbai, the TAC 003, which was displayed at the Make In India Exhibition in Mumbai on 30 August 2016, will be the first Indian made aircraft with a competitive cost.

Jet Airways pilot Amol Yadav will be allotted a 157-acre plot in Palghar from where he aims to build six-seater and 20-seater planes. He is now looking for funding.

Yadav, 41, a deputy chief pilot with Jet Airways, is scheduled to meet with chief minister Devendra Fadnavis on Monday, along with representatives of companies that specialise in manufacturing aircraft engine and other technology.

A strong supporter of Prime Minister Narendra Modi's 'Make In India' initiative, Yadav says aviation in India could make headway only if we start making planes in the country.

Yadav, who is employed as senior commander with Jet Airways, has been constantly following with the CMO.

The state government too is supportive of Yadav's Make in India plans as has big plans in terms of regional air connectivity.

Fadnavis, meanwhile, said the state government will do everything possible to help Yadav. Mantralaya sources said the Palghar district collector, Abhijit Bangar, has been asked to attend the CM's meeting with Yadav. Besides, air safety officers from the DGCA will also attend the meeting, according to reports