British and American spy agencies regularly intercept voice and data calls from phones made on board civil aircraft around the world, and the snooping has increased with the spread of in-flight calls, leaked classified files have revealed. 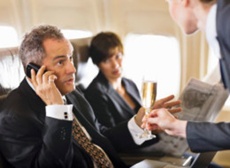 Intelligence agents at the UK Government Communications Headquarters, GCHQ, and America's National Security Agency, NSA, are able to identify and intercept individuals' phones on most commercial flights in "near real time" via a triangulation process using passenger lists, satellites and ground detectors.

They can even scramble phones so users switch them back on, in order to steal the security code, documents by Edward Snowden, the former NSA contractor, reportedly reveal.

Snowden sent the top secret files to Insight, the US-based investigative web site, which shared them with Le Monde, the French daily. Le Monde said it took many months to secure and corroborate the technical information they contain.

Israeli diplomats and academics, along with officials of the Palestinian Authority and Jordan but also at least one top private defence group, have been among the reported targets.

The two media cite a "top secret" 2010 internal newsletter of the NSA's Signals Intelligence Directorate, or SID, which summed up the practice by asking: ''What do the President of Pakistan, a cigar smuggler, an arms dealer, a counter-terrorism target, and combating proliferation target have in common?

"They all used their everyday GSM phone during a flight."

This "new field of espionage" started as early as 2007, when phone calls were intercepted on board planes belonging to Air France, singled out as a prime target due to "terror" fears, the documents suggest.

By December 2008, a NSA document said 50,000 people had already used their mobile phones in flight, with the figure doubling by February 2009.

The NSA attributed the increase to ''more planes equipped with in-flight GSM capability, less fear that a plane will crash due to making/receiving a call, not as expensive as people thought''.

The reports go on to reveal the existence of a British in-flight eavesdropping programme called Southwinds, detailed in a 2012 presentation to GCHQ called Thieving Magpie.

The slide presentation - designated ''top secret strap,'' one of the highest UK classification levels - claims British intelligence can gather all the cellular activity, voice communication, data, metadata, and content of calls on board many commercial aircraft.

At the time of the presentation, intercepts were still restricted to the regions covered by satellites from British telecommunications provider Inmarsat: Europe, the Middle East, and Africa. However, the presentation adds: "Global coverage via Southwards is planned next year."

The data was collected ''in near real time'', with a 10 minute delay, and an aircraft could be ''tracked'' every two minutes, according to the presentation.

To spy on a telephone's "voice, SMS and data", all that was required was for the aircraft to be cruising at an altitude above 10,000 feet. Secret aerial stations on the ground could intercept the signal as it transited through a satellite. They were able to intercept everything from Facebook ID to email addresses and travel app use.

Data collection was also made on Blackberries. The PIN codes and the e-mail addresses of one device were identified on one unidentified aircraft, on 2 January 2012 at 10.23 am, said Le Monde.

Keeping a telephone switched on was enough to give away its position, one slide explains; the interception could then be cross-referenced with the list of known passengers on the flight, the flight number, and the airline code to determine the name of the smartphone user.

Another slightly cryptic slide reads, "We can confirm that target selectors are on board specific flights in near real time, enabling surveillance or arrest teams to be put in place in advance."

Analysing files dating from 2005 to 2013, including unpublished documents from the Snowden archives, Le Monde said that while many airlines were targeted, including British Airways, the British and Americans homed in on Air France in particular from an early stage.

A 13-page NSA document dated 15 July 2005 stated that based on a CIA report, some or all of ''Air France and Air Mexico flights'' had been ''possible terrorist targets'' since late 2003.

Among examples cited was a call on 23 March 2012, at 1.56pm on the UAE airline Etihad's flight 8271 between JFK and Denver, an Aeroflot's Nice-Moscow flight on May 20, 2011, and a Qatar Airways flights from Milan to Doha and from Athens to Doha.

A spokesman for GCHQ told Le Monde that while it never commented on issues pertaining to intelligence, "our work is conducted in strict accordance with the judicial and political framework which ensures our activities are authorised, necessary and proportionate". Its activities were liable to undergo "strict controls" from the relevant government and security bodies, and respect the European convention of human rights.

The NSA said its "intelligence activities fully conform to the current judicial and political framework".

However, Le Monde questioned the scope of the eavesdropping, which extended to employees of a private Israeli laser and fibre optics defence group, Ophir Optronics, and "university centres known for their very high-level scientific level". It said that while intelligence links between Britain, America and Israel were very close, this did not stop the UK from spying on Israeli diplomats "both in Israel and abroad" and academics, as well as "the royal court of Jordan", including the king's head of protocol and Jordan's ambassador to Washington.

The newspaper noted that the surveillance underlined an old adage of espionage: "There's no such thing as friends."

Snowden recently described Britain's strengthening of its surveillance laws as part of an "authoritarian trend".  The 33-year-old has been living in Russia since he fled the US via Hong Kong three years ago.