Scientists at the National Agri-Food Biotechnology Institute (NABI) in Mohali, a lab under the Department of Biotechnology, have developed coloured wheat varieties that they claim to have high nutrition value. These wheat varieties – which could be in blue, purple or black colour - will soon be commercially available in the country, say scientists. 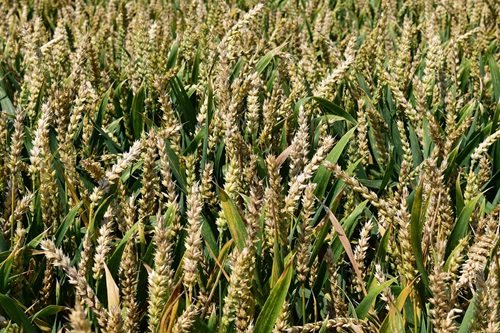 Food manufactured from these coloured grains, which pack more health benefits than those made out of the ‘normal’ amber wheat, may soon be available at department stores, they say.
Agricultural biotechnologists led by Monika Garg at the National Agri-Food Biotechnology Institute (NABI) in Mohali, who developed these coloured wheat varieties, have already transferred the technology to private companies for commercial use. Some of these companies have also signed agreements with the Department of Biotechnology lab has signed agreements are already growing them.
“We have not released them for individual farmers as they may find it difficult to sell them, at least for the time being,” said Garg.
Common wheat varieties grown all over the world are white (or amber) in colour. The unconventional ones get their colour from natural antioxidants abundantly present in fruits such as blueberries, blackberries and jamun.
While a very small quantity of anthocyanins is present in regular wheat varieties, the coloured ones are rich in them. For instance, black wheat packs 28 times more anthocyanins than its conventional cousin.
The coloured varieties offer a lot of health benefits, said Garg. Black wheat, for instance, may help prevent fat deposition, control glucose levels, improve insulin tolerance and lower blood cholesterol, as indicated by mouse studies at NABI. Besides anthocyanins, the varieties have relatively higher levels of proteins and essential micronutients such as zinc. The antioxidants present may also help ward off ageing, obesity and diabetes. The varieties have been developed using classic biotechnology tools that are commonly used by plant breeders. Through continuous breeding programmes over the years, the NABI scientists developed several generations of coloured wheat lines.
After working on these varieties for nearly a decade, the scientists have found that they adapt well to local climatic conditions and produce satisfactory yield levels, before transferring the technology to private companies.
Garg said the institute has already signed MoUs with 10 firms from different states, including Bihar, Gujarat and Maharashtra, apart from traditionally predominant wheat-producing states such as Punjab, Haryana and Madhya Pradesh.
“We want to make bakery products and atta from these unconventional wheat varieties popular among consumers, so that the benefits of antioxidants can reach the general public through their favourite cereal,” said Garg.
MORE REPORTS