British police today arrested WikiLeaks founder Julian Assange from inside the Ecuadorean embassy, where he has been holed up for nearly seven years to avoid extradition to Sweden. 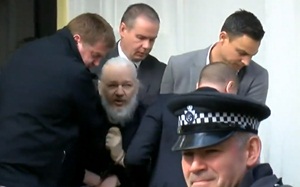 Videos posted online showed police carrying away an agitated man with white hair and a white beard being carried out of the central London building by at several men.
“Julian Assange, 47, has today, Thursday 11 April, been arrested by officers from the Metropolitan Police Service (MPS) at the Embassy of Ecuador,” the police said.
Police said they arrested Assange with due permission from the Ecuadorean embassy and they have been “invited into the embassy by the Ambassador, following the Ecuadorean government’s withdrawal of asylum.”
Assange was taken into custody by personnel from a central London police station and will be brought before Westminster Magistrates’ Court later.
Assange took refuge in 2012 in Ecuador’s embassy in London in the wake of the WikiLeak expose and subsequent slapping of charges of sexual assault on him by the authorities.
Sweden later dropped the investigation, but Assange was arrested for breaking the rules of his original bail in London.
However, Assange feared the UK authorities will extradite him to face charges in the United States, where federal prosecutors are investigating WikiLeaks.
Ecuadore’s relationship with Assange soured after he leaked information about President Lenin Moreno’s personal life.
Moreno had previously said Assange has violated the terms of his asylum and that he had asked Britain to guarantee that Assange would not be extradited to a country where he could face torture or the death penalty.
“The British government has confirmed it in writing, in accordance with its own rules,” Moreno said.
WikiLeaks said Ecuador had illegally terminated Assange’s political asylum in violation of international law.
Sweden closed its preliminary investigation into a suspected rape in 2017 as there was “no reason to believe that the decision to hand him (Assange) over to Sweden could be implemented within a reasonable timeframe”.
Sweden’s then chief prosecutor Marianne Ny said at the time that the probe could be reopened should the situation change. “If he at a later time were to make himself available, I can decide to immediately resume the preliminary investigation,” Ny, who has since retired, said in a 2017 statement.
MORE REPORTS