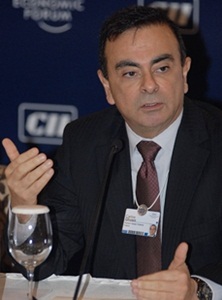 The latest charges give a fresh twist to the Ghosn saga that began with his arrest last month over alleged salary rule violations, dashing chances that he would be released on bail anytime soon.
The fresh arrest is based on suspicions that around October 2008, Ghosn shifted personal trades to the automaker to make it responsible for 1.85 billion yen ($16.6 million) in appraisal losses, and inflicted damage on Nissan by having it deposit a total of $14.7 million on four occasions between June 2009 and March 2012 into a related bank account, according to the prosecutors.
The re-arrest means that Ghosn could be detained for at least another 10 days in a Tokyo jail, where he has been confined since he was arrested last month on initial allegations of financial misconduct.
Prosecutors also raided Ghosn’s residence in Tokyo on Friday in search of evidence, broadcaster TV Asahi reported.
The re-arrest of Ghosn after the 19 November episode that jolted the Nissan-Renault alliance came a day after a Tokyo court unexpectedly rejected prosecutors’ request to extend Ghosn’s detention.
Kyodo news agency said when the allegation that Ghosn had shifted the paper losses first surfaced in media reports late last month, his lawyer Motonari Otsuru said his client had denied the allegation. Ghosn had considered the move but did not do so after being told by financial authorities that it would be illegal, Kyodo quoted Otsuru as saying then.
The Tokyo court said in a statement on Friday that the lawyer for Ghosn’s former deputy Greg Kelly, who was arrested along with Ghosn, has requested his client’s release. Kelly’s detention extension was rejected along with Ghosn’s.
The re-arrest also comes hours after Ghosn vowed to restore his good name in court and to hold a news conference after his release.
MORE REPORTS