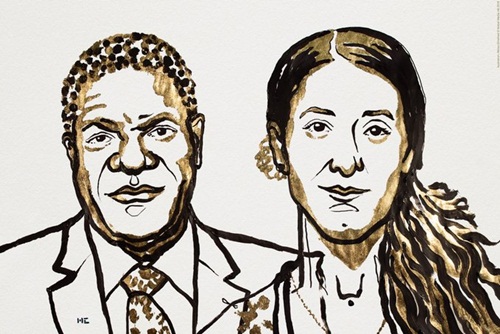 The Norwegian Nobel Committee awarded the 2018 Nobel Peace Prize to Denis Mukwege and Nadia Murad “for their efforts to end the use of sexual violence as a weapon of war and armed conflict and courageously combating war crimes and seeking justice for victims,” the Oslo-based Norwegian Nobel Committee said in a statement today.
“Both laureates have made a crucial contribution to focusing attention on, and combating, war crimes. Denis Mukwege is the helper who has devoted his life to defending these victims. Nadia Murad is the witness who tells of the abuses perpetrated against herself and others. Each of them in their own way has helped to give greater visibility to war-time sexual violence, so that the perpetrators can be held accountable for their actions,” the Norwegian Nobel Committee said while announcing the awards.
Mukwege, 63, is the medical director of Panzi Hospital in Bukavu, the capital of South Kivu province in eastern Congo, which has been blighted by more than two decades of conflict.
He founded Panzi in 1999, a year after a war erupted between Congo and neighboring Rwanda that eventually spread to engulf half a dozen African countries. The hospital offered obstetric care and treatment for severe gynecological problems. Among its patients are victims of sexual violence, a hallmark of Congo’s conflict.
Murad, a member of the Yazidi minority in Iraq, was captured by the Islamic State as it overran villages in the Sinjar district. The Nobel Committee said several hundred people were massacred in Murad’s village and she was captured and repeatedly subjected to rape and other abuses.
She managed to flee after three months and has since become a global spokeswoman on sexual- violence issues. In 2016, she was named the United Nations first Goodwill Ambassador for the Dignity of Survivors of Human Trafficking.
Denis Mukwege was performing his second operation of the day during his regular Friday clinic when he heard the news that he had received the 2018 Nobel Peace Prize.
"If we want people to say 'no more war', we have to show how brutal it is," Berit Reiss-Andersen, chair of the Norwegian Nobel Committee, said when interviewed by journalist Stig Arild Pettersen.
So far 99 Nobel Peace Prizes have been awarded between 1901 and 2018. The awardees also include 24 organisations.
Two Peace Prizes have been divided between three persons, while 17 women have been awarded the Nobel Peace Prize so far.
The average age of Nobel Peace Prize Laureates is 62.
At least one awardee, Le Duc Tho, has declined the Nobel Peace Prize.
MORE REPORTS