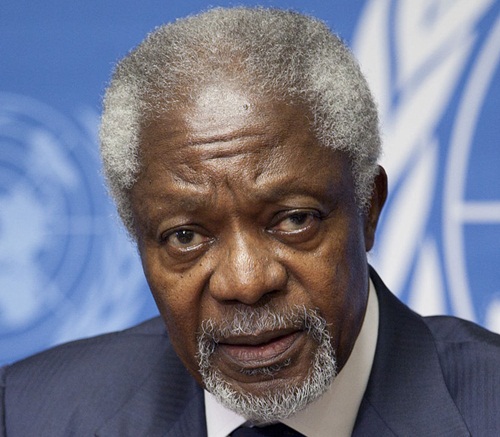 Annan, a Ghanaian national, died peacefully at a hospital in Bern, Switzerland, in the early hours, after a short illness, the Kofi Annan Foundation said.
He was surrounded in his last days by his second wife Nane and children Ama, Kojo and Nina, it said.
The 80-year-old served as the seventh UN chief for almost 10 years from 1997 to 2006 and was awarded a Nobel Prize in 2001, which he shared with the UN.
A statement shared by his Twitter account on Saturday described Annan as a "global statesman and deeply committed internationalist".
"During his distinguished career and leadership of the United Nations he was an ardent champion of peace, sustainable development, human rights and the rule of law," the statement read.
"Kofi Annan was a son of Ghana and felt a special responsibility towards Africa," it continued.
Current UN Secretary-General Antonio Guterres said Annan was "a guiding force for good".
"It is with profound sadness that I learned of his passing.
"In many ways, Kofi Annan was the United Nations. He rose through the ranks to lead the organisation into the new millennium with matchless dignity and determination."
Before becoming secretary-general, Annan served as UN peacekeeping chief and as special envoy to former Yugoslavia, where he oversaw a transition in Bosnia from UN protective forces to NATO-led troops.
The UN peacekeeping operation faced two of its greatest failures during his tenure: the Rwanda genocide in 1994, and the massacre in the Bosnian town of Srebrenica in July 1995.
Retired Canadian general, Romeo Dallaire, who led UN forces in Rwanda, is alleged to have sent a message to Annan's office, warning of the impending massacre, but Annan reportedly told UN military forces not to take any action.
In both cases, Annan offered apologies, but ignored calls to resign.
MORE REPORTS