Nobel Prize-winning British novelist V S Naipaul, known for works like A Bend in the River, A House for Mr Biswas,In a Free State and The Enigma of Arrival, died at his home in London aged 85, the BBC reported on Saturday. 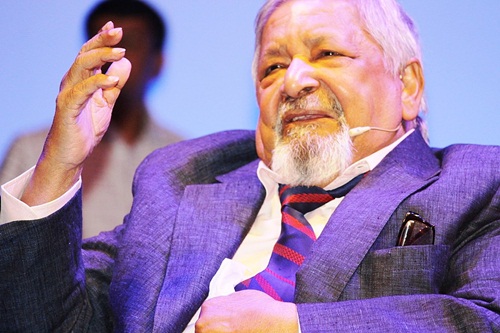 Trinidad-born Vidiadhar Surajprasad Naipaul, famously known as V S Naipaul, won the Nobel Prize for literature in 2001. Naipaul, who began writing in the 1950s, won numerous coveted literary awards during his career during which he wrote critically acclaimed novels.
In a statement, his wife Nadira Naipaul called him a “giant in all that he achieved” and said he had died surrounded by “those he loved having lived a life which was full of wonderful creativity and endeavour”, the BBC said.
Born in 1932 to a family that had arrived in Trinidad from India in the 1880s, Naipaul was raised in relative poverty. He moved to England at 18 after receiving a scholarship to University College, Oxford.
Naipaul was known for his writings on colonialism and decolonisation, exile and the struggles in the developing world. Naipaul published more than 30 works spanning both fiction and nonfiction.
He wrote his first novel while at Oxford, but it was not published. He left university in 1954 and found a job as a cataloguer in London’s National Portrait Gallery.
His first published novel, The Mystic Masseur, written in 1955, was poorly received at first but the following year won the first of his literary awards, the John Llewellyn Rhys Memorial Prize for young authors.
Some of his famous books are A House for Mr Biswas, India: A Million Mutinies Now, The Middle Passage and The Overcrowded Barracoon. His book ‘An Area of Darkness’ is a semi-autobiographical account of a trip to India in the 1960s.
He was knighted by Queen Elizabeth in 1989.
Naipaul travelled to the Muslim-majority countries of Iran, Pakistan, Malaysia and Indonesia for his books Among the Believers (1981) and Beyond Belief (1998). His work on Islam, earned him the rage of left-wing “intellectuals”.
He published India: A Wounded Civilization in 1976, in which he wrote: "India has been a wounded civilization because of Islamic violence: Pakistanis know this; indeed they revel in it. It is only Indian Nehruvians like Romila Thapar who pretend that Islamic rule was benevolent. We should face facts: Islamic rule in India was at least as catastrophic as the later Christian rule. The Christians created massive poverty in what was a most prosperous country; the Muslims created a terrorised civilization out of what was the most creative culture that ever existed. India was wrecked and looted, not once but repeatedly by invaders with strong religious ideas, with a hatred of the religion of the people they were conquering. People read these accounts but they do not imaginatively understand the effects of conquest by an iconoclastic religion."
On Ayodhya, Patrick French quoted Naipaul as saying: "For the poor of India to identify something like this, pulling down the first Mughal emperor’s tomb, is a marvellous idea. I think in years to come it will be seen as a great moment.... It would be a historical statement of India striving to regain her soul. What puzzled me and outraged me was the attitude that it was wrong, that one must not undo the (Muslim) conquest. I think it is the attitude of a slave population."
MORE REPORTS