Veteran Congress leader and a former union minister of information and broadcasting, Priya Ranjan Dasmunshi passed away at 72. He was in coma for the past eight years, after he suffered a severe heart attack and stroke in July 2008. 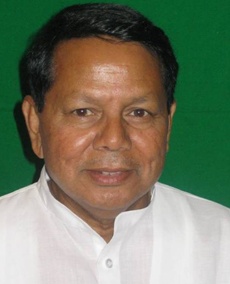 Dasmunshi, an influential politician from Bengal, died today at a hospital in Delhi. He was declared dead at 12.10 pm by doctors at the Indraprastha Apollo Hospital.

He is survived by his wife Deepa Dasmunshi, a theatre worker and his son Priyadeep.

Dasmunshi was admitted to the All India Institute of Medical Sciences (AIIMS) on 12 October 2008, after he complained of breathlessness and severe chest pain. Doctors treating him had said that he suffered a heart attack on way to the hospital.

According to the doctors, Dasmunshi had suffered a complete left ventricular failure of the heart before he was admitted to AIIMS casualty. Dasmunshi, also a diabetic, suffered the heart attack the same year in July on way to Kolkata from Malda district in northwest Bengal, after attending a Congress party meeting.

He was admitted to Calcutta's Apollo Gleneagles hospital where he underwent angioplasty to unblock two blood vessels. After a week at AIIMS, he was shifted to Apollo Hospital and remained there for nearly a year, before being air-lifted to Germany.

''We tried almost everything possible, I even took him to Germany for stem cell therapy but unfortunately that didn't really work. The therapy was mainly aimed at improving his brain function but it wasn't effective,'' Deepa said.

Dasmunshi first entered Parliament in 1971 representing the Raiganj constituency in West Bengal. He served as the union minister of parliamentary affairs and minister of information and broadcasting from 2004 to 2008, during the first term of the Manmohan Singh-led UPA government.

After his hospitalisation, the Congress fielded his wife, Deepa Dasmunshi, from the constituency in 2009. In 2014, the Trinamool Congress roped in his brother Satyaranjan Dasmunshi to face-off against Deepa.

Dasmunshi also served as the President of the All India Football Federation for almost 20 years. He was also the first Indian to serve as a match commissioner in a FIFA World Cup game.

''Shri Priya Ranjan Dasmunshi was a popular leader with rich political and administrative experience. He did notable work to popularise football in India. Saddened by his demise. My thoughts are with Deepa Dasmunshi ji and family as well as his supporters'', the prime minister said.

''I feel like I have become an orphan. He was my political friend, philosopher and guide. In matters political, or personal, I used to seek his guidance on almost everything,'' said Subrata Mukherjee, the senior most minister in Mamata Banerjee's cabinet.

CPI(M) MP and politburo member Md Salim said Dasmunsh was a master of the art of ''cultivating personal relationships even with political opponents''.

''His death brings an end to an era of data-based and logic-based debates,'' added, Salim, the present MP from Raiganj. Salim said that many residents of Raiganj were still fond of Dasmunshi.