Amidst speculation as to who would be the National Democratic Alliance's (NDA) candidate for President, reports said the ruling alliance has decided to name Metroman E Sreedharan as a consensus candidate for the coming Presidential election. 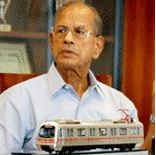 "In fact, there is a strong probability of Sreedharan being nominated as the ruling BJP-led NDA's candidate for the president's post in the July 17 election. It would be improper if he is seen sitting with PM Modi and Union Urban Development Minister M Venkaiah Naidu on the dais just days before the name of the NDA candidate is announced. Moreover, PM Modi maintains distance with the person he has to push up," , a report in India Today suggested citing sources.

The report comes close on the heels of the Prime Minister Office (PMO) excluding the 'Metroman' from the list of 13 dignitaries suggested by the Pinarayi Vijayan-led LDF government in Kerala to share the dais with Prime Minister Narendra Modi at the inaugural function of the Kochi Metro.

His name has later been added after the Kerala CM wrote to the PMO, giving no indication that the BJP is likely to consider his name for the nation's highest office – that many now see as a well calculated and deliberate move by the BJP.

E Sreedharan, who was the main force behind the Konkan Railway, as well as the Kolkata and Delhi Metros and took up the challenge of repeating the success in a state like Kerala as well, could be acceptable to the Left, the Right and the Secular.

Besides Sreedharan, several other names, including Mohan Bhagwat and Gopal Krishna Gandhi union ministers Venkaiah Naidu and Sushma Swaraj, Thawar Singh Gehlot and Jharkhand governor Draupadi Murmu Singh have been doing the rounds. However, the BJP has been keeping a stoic silence on the matter.

The Congress too is yet to reveal their choice of candidate for the upcoming presidential elections. The opposition list includeed the likes of Sharad Yadav, former West Bengal governor Gopalkrishna Gandhi and the former Lok Sabha speaker Meera Kumar.

The process for filing nominations for the election of the fourteenth President of India was recently opened by the Election Commission of India with the list of nominated candidates expected before 28 June. The election is slated for 17 July with the formal results announced on 20 July.