Veteran communist leader Govind Pansare and his wife Uma Pansare were shot in Sagarmala, Kolhapur on Monday while they were out for their daily morning walk. Pansare was hit by gun shots twice and is in critical condition, while Uma was less badly hurt and is out of danger. 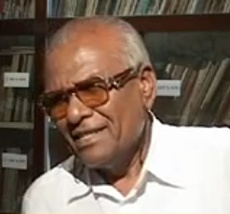 According to reports, five men have been detained in this connection, and the Mumbai Police Crime Branch is investigating the case.

Two unidentified assailants on a motorbike bike shot four rounds at the two at close range at around 8.00 am.

Pansare was hit near his neck and in the chest, while one bullet hit his wife. They are being treated at Astor Aadhar hospital in the town. Pansare has suffered heavy loss of blood and is in a serious condition.

At least 20 police teams are conducting investigations in Satara and Sangli. Police are interrogating history-sheeters as part of the investigation.

The 82- year old Pansare, a lawyer and writer, was leading a campaign against the collection of toll on Maharashtra's roads. Fifteen days ago he was threatened and abused for speaking against the glorification of Nathuram Godse at a gathering.

This incident comes after the assassination of Dr Narendra Dabholkar – said to be an associate of Pansare - and Right to Information activist Satish Shetty.

"We call upon all district authorities to take urgent steps to nab the shooters. This is another case similar to the late Dr Narendra Dabholkar's murder. We protest and appeal to the chief minister of Maharashtra to act quickly, said Dr Kango, CPI secretary, in a statement. Pansare was a member of the Communist Party of India.

Maharashtra CM Devendra Fadnavis tweeted that he was deeply shocked by the 'heinous' attack.

He said that he prayed for Pansare and his wife's speedy recovery.

Condemning the incident, Nationalist Congress Party chief Sharad Pawar said, "This attack is a matter of concern for a progressive state like Maharashtra."

Leader of Opposition in the Maharashtra Assembly Radhakrishna Vikhe Patil sought dismissal of state police chief Sanjeev Dayal, alleging he was not competent to tackle the law and order situation.

Senior Congress leader and former chief minister Prithviraj Chavan said Pansare had always fought against capitalist and communal forces and those could be behind the murderous attack on the veteran leader.

"Narendra Dabholkar was fighting forces of superstition and communalism and he was also gunned down," Chavan said, adding, "The government should not only apprehend people who pulled the trigger but also the forces behind them."