Rasipuram Krishnaswamy Iyer Laxman, the creator of the long-loved 'common man' by whom most Indian political parties swear (if only for votes), has died at the age of 94 in Pune, where he had been hospitalised for some weeks. 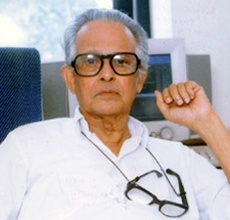 With his long career as the staff cartoonist of The Times of India, R K Laxman was the true spokesman of the aam admi. His pocket cartoon series, You Said It popularised political cartoons and satire in India, though his cartoons may not make too much sense to people like US President Barak Obama, currently visiting India.

President Pranab Mukherjee and Prime Minister Narendra Modi were among the first to condole the death of India's iconic newspaper cartoonist.

"In death of Laxman, India will miss the genius who made the common man into a national icon," the President said.

Prime Minister Modi said, ''My condolences to the family & countless well-wishers of a legend whose demise leaves a major void in our lives. RIP R K Laxman."

The tributes from India's top politicians came despite the fact that they were the main target of Laxman's cartoons.

Aam Admi Party chief Arvind Kejriwal, set to contest the Delhi assembly elections for the second time, said, ''Sad to know about the passing away of legendary cartoonist R K Laxman - he was truly the voice of Aam Aadmi.''

Union environment minister Prakash Javadekar also joined in: ''Very saddening news, he was a great artist who created benchmark with his unparalleled work,'' he said.

Many others across India joined in sending condolence messages, including fellow-cartoonists and social workers.

Originally from Mysore, R K Laxman started drawing early, looking at illustrations in magazines such as Britain's Punch and Bystander. He drew on the floors and walls of his house. His schoolteachers were among his earliest caricatures – quite understandably, as many of today's students might agree.

Rejected by Mumbai's once-famous J J School of Art (where Rudyard Kipling's father was once a professor) on the ground that he lacked talent, Laxman moved on to graduate from the University of Mysore.

He began to draw illustrations for his equally illustrious brother R K Narayan, a writer perhaps best known for his Tiger of Malgudi, among many other published works.

Laxman worked for several other publications before joining The Times of India group in the early 1950s; and he continued there till the end of his life.

''We all grew up with Laxman. Our interest in cartoons was inspired only from him,'' says Keshav Venkataraghavan, the staff cartoonist of The Hindu newspaper. ''We used to draw his cartoons and practice. His cartoons were laced with satire and humour in a way that even the person who was his target used to enjoy them.''

Laxman suffered a stroke in 1993 and retired from active work soon after.

Like many other cartoonists, Laxman was not a very pleasant man to know personally. This writer knows that he was a 'difficult' personality, sticking to his permanent cabin in The Times of India, and arrogant with his colleagues.

But the artist is not the man.

In an interview to Outlook magazine some years ago, he said, ''My Common Man is omnipresent. His simple dhoti and checked coat could be anybody's. His bald head could belong anywhere … his dhoti could be the Malayali mundu too. He's been silent all these 50 years. He simply listens.''