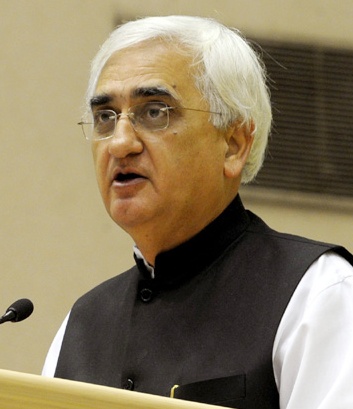 India's foreign minister Salman Khurshid lambasted both the Supreme Court and the Election Commission before an audience in London on Thursday.

Speaking on the 'Challenges of Democracy in India' at the School of Oriental and African Studies (SOAS) in London on Thursday night, he said, "The courts are now deciding who can go to Parliament and who can't. That's not right, this is not law."

In a clear reference to the Supreme Court ruling debarring lawmakers convicted of criminal offences, Khurshid said it was "a judge-made law".

"The critical thing about judges deciding in India, which is different from your system, is we have 31 judges in the Supreme Court and 543 parliamentarians. But they never sit in benches which have more than two or three judges ... two of 31 decide what should happen. Two can actually say something about parliamentarians being tried or not, whether they can contest or not, what kind of affidavit they have to produce ..."

The minister went on to share caustic views on the Election Commission. While conceding that the three-member panel did clean up the Indian elections, he said the EC's Model Code of Conduct made it difficult for parties to win elections.

"There are again only three of them ... three people can decide what word you can use in an election campaign. As I understand the broad philosophical approach is, 'you should do and say nothing that wins you an election, you should try your best to lose elections,' " Khurshid quipped.

In a similar vein of jocularity, he added, "For five years we try to lose elections - give us 15 days to try and win them, please."

Last month, the Congress leader had earned Rahul Gandhi's disapproval for describing Narendra Modi as 'impotent' over his handling of the 2002 Gujarat riots.

His latest gaffe immediately provoked opposition reactions, even as the Congress sought to defend him.

"You are losing, and out of frustration you are giving such statements that end up degrading you more," said Bharatiya Janata Party's Muslim face Mukhtar Abbas Naqvi.

Congress spokesman Abhishek Singhvi told reporters in New Delhi, "I do not know in what context it has been said. It is always said in some context and it is not fair to pluck something out of context.

"Khurshid, who is a former law minister, knows well (what he says) and would in no manner cross the boundary."