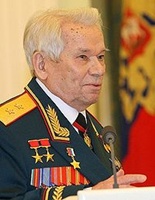 Lt Gen Mikhail T Kalashnikov, the legendary Russian General who created the AK-47 machine gun, the first of the Kalashnikov range of assault rifles that are associated with modern warfare, died on Monday in Izhevsk, the capital of the Udmurtia republic.

Kalashikov had been in the intensive care unit at a hospital in Udmurtia's regional capital, Izhevsk, while ''in serious but stable condition,'' according to the local branch of Russia's health ministry.

In June he underwent an operation in Moscow for implanting a pacemaker.

''We received the sad news today: legendary small-arms inventor Mikhail Kalashnikov died at the age of 94 after a prolonged illness,'' Viktor Chulkov, a spokesman for the head of the Udmurtia republic, Kalashnikov's home region, wrote on Facebook, the Itar-Tass news agency reported.

Kalashnikov, who was born into a peasant family in the southern Siberian steppe, had little formal education but had innate mechanical skills, which he developed with own efforts.

His skills found fruition after he was conscripted to the Red Army and he soon became the toast of kremlin with the creation of the assault rifle.

The rifle's creation also elevated Kalashnikov to senior positions in the Soviet arms-manufacturing bureaucracy and ultimately to six terms on the Supreme Soviet.

Kalashikov developed the concept of a reliable assault rifle for the Soviet infantry during his convalescence stay in Kazakhstan in 1941, after he was injured in battle against German tanks during the Second World War.

Kalashikov came out with a prototype version of his assault rifle at a local train depot workshop. But it took him until 1946 to fine-tune the model and come out with a reliable model that passed all firing tests.

"I was told that when Stalin was shown the AK-47 for the first time, he took it in his hand and didn't put it down while walking around his Kremlin office for the rest of the day," Kalashnikov wrote in his memoirs.

AK-47 is an abbreviation for ''the automatic by Kalashnikov'' and the year the competition to develop the Soviet infantry rifle for the Cold War ended.

The Kalashnikov rifles with their short barrels, steep front-sight posts and curved magazines have become a symbol of both conflict and revolution and continues to remain so even now.

Tens of millions of Kalashnikov rifles have been manufactured and their unchecked distribution has led to its widespread use in terrorism, child-soldiering and crime throughout the world.

The original AK-47 was followed in the 1950s by a modernised version, the AKM, which was lighter in weight, although the underlying design remained the same.

The AK-47s were shorter than traditional infantry rifles, with a firing range between a pistol and the standard rifle. But the rifles earned its place in martial history in the 1960s in Vietnam, where a new American rifle, the M-16, experienced problems with corrosion and jamming in the jungles, while Kalashnikovs, carried by Vietcong guerrillas and North Vietnamese soldiers, worked almost flawlessly.

The Kalashnikovs eventually became the standard fire arm for armies across Eastern Europe and Asia and even the United States bought them to arm anti-Soviet fighters in Afghanistan in the 1980s and indigenous Afghan and Iraqi forces in recent years.

General Kalashnikov's bureau also used the AKM design to develop machine guns for infantry squads, helicopter crews and vehicles. By the 1970s, the rifle's design had become the basis for a new Soviet rifle, known as the AK-74 that fired a smaller and faster cartridge similar to that of the M-16. That rifle remains the standard arm of the Russian Army even now.

The AK-47 and its derivatives are currently produced in about 30 countries, including Bulgaria, China, Egypt, Finland, India, Israel, the Netherlands, South Africa and Sweden.