Arafat may have been poisoned with polonium: Swiss forensic report 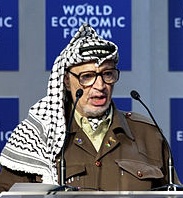 The late Palestinian leader Yasser Arafat may have been poisoned with radioactive polonium, a Swiss forensic report, obtained by al-Jazeera, suggests.

According to Arafat's official medical records, he died in 2004 due to a stroke resulting from a blood disorder.

The Palestinian leaders' body was exhumed last  year amid claims he was murdered.

According to the report, tests on the body showed  "unexpected high activity" of polonium, which "moderately" supported the poisoning theory.

Many Palestinians have long believed that Arafat had been poisoned by Israel and there had also been allegations that he had Aids or cancer. Israel has however denied any involvement.

A spokesman for the Israeli foreign ministry dismissed the investigation as "more soap opera than science".

Tests were conducted on samples taken from Yasser Arafat's exhumed body in November 2012 by experts from the Vaudois University Hospital Centre (CHUV) in Lausanne.

Samples had also been analysed by Palestinian, French and Russian teams, whose findings have not yet been published by the Palestinian Authority.

It noted a lack of adequate biological specimens, especially soft tissues, as also the eight years between death and the investigation, that subjected detection to uncertainties.

Arafat died in a French military hospital on 11 November 2004 after he was transferred there from his headquarters in the West Bank.

His health had deteriorated over weeks, starting with severe nausea, vomiting, abdominal pain and diarrhoea around four hours after eating dinner on 12 October.

According to French doctors he died of a massive stroke and had suffered from a blood condition known as disseminated intravascular coagulation, or DIC.

However, the records were inconclusive about the cause of the DIC. Further no autopsy was carried out.

Allegations of Arafat having been poisoned emerged immediately after his death with the claim raised again by al-Jazeera TV last summer, after a nine-month investigation culminating in the film What Killed Arafat?

According to Al-Jazeera, it was given access to a duffel bag of Arafat's personal effects by his widow, which it passed to a Swiss institute. Swiss toxicological tests on the samples which included hair from a hat, saliva from a toothbrush, urine droplets on underpants and blood on a hospital hat revealed high traces of polonium-210.