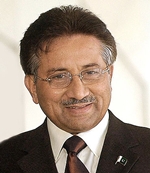 A close aide of Pakistan's former military ruler Pervez Musharraf claimed on Wednesday that several lawmakers cutting across party lines had assured Musharraf's party, the All Pakistan Muslim League, that they would give the retired general all possible support in his fight against several court cases, including for high treason.

Kahlon said that several senior lawmakers including representatives of PTI and MQM had privately conveyed their dismay over Prime Minister Nawaz Sharif's stance on Musharraf and had provided assurances of extensive support for Musharraf.

The advisor said that these lawmakers sympathise with Musharraf and some of them have worked in his former government.

Kahlon said PAT leader Tahirul Qadri, who had worked closely with Musharraf, has conveyed his displeasure over Musharraf's treason case. He said it would be an uphill task for Pakistan Muslim League - Nawaz (PML-N) to initiate a treason case against Musharraf based on a personal grudge.

Kahlon said that Nawaz's fixation with trying the former military ruler for high treason under Article 6 of the Constitution ''demonstrates that Nawaz is a democratic dictator who believes in pursuing the reckless path of personal revenge as opposed to working in the best interest of the country.''

Musharraf's aide also said that ''no one should underestimate the strength of Musharraf'' and that ''as a Pakistani soldier, he is determined to face all challenges with dignity and courage''.

He further said that Musharraf must be given credit for ''the unprecedented step of voluntarily returning to Pakistan to face all politically motivated cases without any form of a deal in place,'' adding that ''if the rule of law is upheld, Musharraf will eventually be acquitted in all the cases.''

According to the PAT official spokesperson, a high level delegation of PTI will be visiting the PAT office to discuss the country's political scenario, particularly Musharraf's treason case.