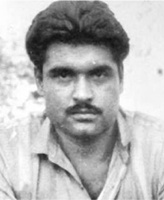 Dalbir Kaur, sister of Indian prisoner Sarabjit Singh who died in a Lahore hospital after he was brutally assaulted by a gang of six in a Lahore jail on 26 April, has blasted politicians on either side of the border for showing cruel negligence to a her innocent brother who was wrongly imprisoned by the Pakistanis for over the past 23 years.

Pakistani authorities today said Sarabjit died following a cardiac arrest at the Jinnah Hospital in Lahore in the wee hours of Thursday.

"Sarabjit gave up his life for the country. He was martyred for India. (Pakistan President Asif Ali) Zardari killed him because of elections," Dalbir Kaur told reporters on the Wagah border.

Kaur also alleged that the so-called Pakistani human rights activist Ansar Burney had demanded money from her for help secure release of Sarabjit Singh from the Pakistani jail.

She appealed to all countrymen to unite and attack Pakistan, where her brother breathed his last hours of the day after remaining comatose for nearly a week following the brutal assault inside the jail.

"Pakistan is a coward. It's time to wage a war against it," said Kaur, while addressing a press conference in New Delhi on Thursday.

"I left Pakistan as nurses and doctors stared laughing at me. They knew that you can ask about the health of a person only when he is alive and this person (Sarabjit) was dead," she said.

Dalbir Kaur, who along with Sarabjit's family had gone to Pakistan after he was admitted to a Lahore hospital following a savage attack on him in a Lahore jail on 26 April, returned on Wednesday.

"I travelled in trains, buses and went from pillar to post to bring back Sarabjit, but I failed."

Sarabjit Singh, who was admitted to a Lahore hospital on 26 April after being savagely attacked in jail, was declared dead early on Thursday. He had suffered serious head injuries and had reportedly been on ventilator support since then.

Sarabjit Singh had been on a death row in a Pakistani jail since 1990 after being convicted by Pakistani courts for bomb blasts in Lahore and Multan that left 14 people dead.

Both the courts and former Pakistan president Pervez Musharraf had rejected his mercy petitions even after it came to light that he was wrongly implicated. The previous Pakistan People's Party-led government, however, had put off Sarabjit's execution for an indefinite period in 2008.

Sarabjit's family claims he was the victim of mistaken identity and had inadvertently strayed across the border in an inebriated state.