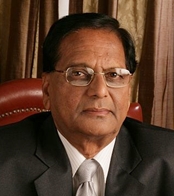 Dr K Anji Reddy, founder and chairman of Dr Reddy's Laboratories (DRL), died at the Apollo Hospital in Hyderabad today. He was 72.

Dr Reddy was ailing for the past few months from a lung disorder and was admitted to hospital about 10 days ago.

He is survived by wife Samrajyam, daughter Anuradha and son K Satish Reddy, who is the managing director and COO of the company.

His son-in-law GV Prasad is the vice chairman and CEO of the company.

Dr Reddy had not been attending day-to-day operations of the company and had left it to his son and son-in-law. He spent much of his time on philanthropy instead.

Dr Anji Reddy was an acknowledged pioneer of reverse engineering and was held in high esteem by the scientific community dealing with pharmaceuticals.

He made significant contribution to the growth of generic pharmaceuticals and in making Indian pharmaceutical products globally competitive and affordable to the common man.

Dr Reddy's Laboratories has been credited with turning the Indian bulk drug industry from dependence on imports in the mid 1980s to self reliance in the mid 1990s and finally into the export-oriented industry that it is today. DRL was the first company to take up drug discovery research in India (in 1993). In April 2001 Dr Reddy's Labs became the first Asian pharmaceutical company outside Japan to be listed on the New York Stock Exchange.

Dr Anji Reddy started his career in the state-owned PSU, Indian Drugs and Pharmaceuticals Limited (IDPL) where he worked from 1969 to 1975.

He left the job to found Uniloids Ltd in 1976, of which was also the and managing director of till 1980, when he founded Standard Organics Limited, before founding Dr Reddy's Labs in 1984 with an initial capital of Rs25 lakh.

Dr Reddy has all the time been active with corporate social programmes as well. He established the Dr Reddy's Foundation and the Naandi Foundation for carrying out philanthropic work.