London: WikiLeaks founder Julian Assange has been arrested by London's Metropolitan Police on a European warrant issued by Sweden. A European Arrest Warrant had been issued by Swedish prosecutors against Assange on suspicion of him committing sexual crimes, a charge which the 39-year-old Australian denies. 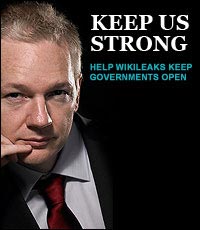 There is broad-based suspicion that Assange has angered powers-that-be around the globe, in particular Washington, by revealing thousands of government secrets on the Internet through his whistle-blower site, WikiLeaks.

He is currently at the centre of a massive row over leaked US diplomatic cables.

The London police said Assange had been arrested at about 9.30 am (0930 GMT) on Tuesday by consent at a London police station under a European Arrest Warrant.

"He is accused by the Swedish authorities of one count of unlawful coercion, two counts of sexual molestation and one count of rape, all alleged to have been committed in August 2010," London police said in a statement.

He is due to appear before City of Westminster Magistrates Court in London later on Tuesday.