Two of the biggest US trucking operators, Swift Transportation Co and Knight Transportation Inc, are close to merging in a share swap deal that values both the combined companies at more than $5 billion, The Wall Street Journal yesterday reported. 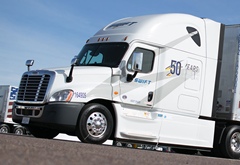 The reports said that each Swift share would be converted into a 0.72 share of the new company through a reverse stock split. Knight shares would be exchanged one-for-one.

The successful deal would be the biggest in the trucking business after XPO Logistics acquired Con-way Inc in September 2015 for $3 billion.

With nearly 20,000 trucks, Arizona-based Swift Transportation is the largest common carrier in the US.

Founded in 1966, Swift started by transporting imported steel through the ports of Los Angeles to Arizona and Arizona cotton for export back through to Southern California.

Today, Swift terminal network has grown to over forty full service facilities in both the continental US and Mexico and generates over $4 billion in revenue.

Founded in 1990 by four knight cousins - Randy, Gary, Kevin and Keith Knight, Knight Transportation began with just a handful of trucks and one service centre to transport general commodities from Phoenix to Los Angeles.