Veteran investor Jim Rogers, 75, says the next bear market in stocks will be more catastrophic than any other market downturn that he's lived through – mainly because even more debt has accumulated in the global economy since the financial crisis, especially in the US. 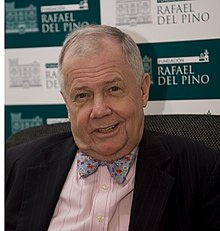 While Rogers isn't saying that stocks are poised to enter bear territory now, nor predicting when they will, he said in an interview with Bloomberg that he is not surprised that US equities resumed their selloff on Thursday and he expects the rout to continue.

The plunge in equity markets resumed Thursday, as the S&P 500 Index sank 3.8 per cent, taking its rout since a 26 January record past 10 per cent and meeting the accepted definition of a correction. The Dow Jones Industrial Average plunged more than 1,000 points, while the losses continued in early Asian trading today as the Nikkei 225 Stock Average dropped as much as 3.5 per cent.

Rogers has seen severe bear markets before. In this century, the Dow plunged more than 50 per cent during the financial crisis, from a peak in October 2007 through a low in March 2009. It sank 38 per cent from its high during the IT bubble in 2000 through a low in 2002.

''Jim has been talking about severe corrections since I started in business over 30 years ago,'' said Alibaba Group Holding Ltd president Mike Evans, a former Goldman Sachs Group Inc banker. ''So I'm sure he'll be right at some point.''

Rogers predicts the stock market will experience jitters until the Federal Reserve increases borrowing costs. That, he says, will be the point when stocks go up again. He said he'll buy an agriculture index today, reiterating his view that prices of such commodities have been depressed for some time.

''I'm very bad in market timing,'' Rogers said. ''But maybe there will be continued sloppiness until March when they raise interest rates, and it looks like the market will rally.''