The Delhi HIGH Court has ordered Associated Journals limited (AJL), the publisher of the Congress-linked National Herald newspaper, to vacate the premises of the National Herald building in the capital. 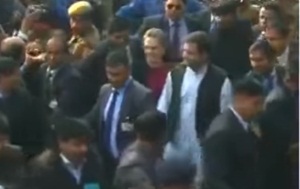 The order comes on a petition filed by the publisher challenging a government order of 30 October cancelling its 56-year-old lease and asking it to vacate the building, Herald House.
The high court rejected the plea of Associated Journals Limited (AJL) against the government order cancelling its 56-year lease rights and asking it to vacate the premises in Delhi's ITO area.
The government has ordered Associate Journals to vacate the building within two weeks.
The centre and the Delhi Land and Development Office (L&DO) said that no press has been functioning in the premises for at least past 10 years and it was being used only for commercial purposes in violation of the lease deed.
The eviction order added a new twist to the National Herald case, which has been described by the BJP as a prime example of corruption by the Congress and the Gandhi family.
The centre in its eviction order mentioned the violation of lease conditions by the publisher of National Herald newspaper. Also, the publishers have been bought out by the Gandhis – Sonia and Rahul – who also inducted some Congress leaders in the bpoard of directors of the new dispensation.
The court noted that although the Young Indian Company is a "charitable company" but questioned the "modus operandi" to acquire 99 per cent of AJL's shares by it.
"Though in the instant case, the beneficial interest of petitioner-AJL is not technically transferred by way of sale/mortgage/gift, but it falls under the last category of 'or otherwise', as by the afore-noted novel modus operandi, AJL has been taken over by Young Indian Company for all practical purposes," the court noted.
The court also noted that the "dominant purpose" for which the building was leased to AJL (for publication of National Herald) has been "practically lost". In essence, the press, for which it has been leased out, is not functioning at least for the last ten years, and instead it is being used for commercial activity in violation of lease terms.
"The 'subject premises' was leased out to legendary AJL for its publication, but the dominant purpose is now practically lost. This Court is constrained to observe that major portion of the 'subject premises' has been rented out and petitioners' newspaper, which was to be housed originally in the basement and ground floor, has now been shifted on the top floor with hardly any 'press activity'.
The Court has cleared the decks for the eviction to be carried out within two weeks time.
"There is no impediment in the way of respondent to invoke the provisions of the PP Act to seek eviction of petitioners, in case petitioners do not voluntarily vacate the 'subject premises' and hand over W.P.(C) 12133/2018 Page 17 of 17 its vacant possession to respondent-Land and Development Officer, within a period of two weeks from today," the order noted.
The petition was filed by AJL, against the order issued to it challenging the Oct 30 eviction order given to it by Land and Development Authority (L&DO).
Associated Journals had shut down over its debts as far back as 2008. BJP leader Subramanian Swami had challenged the Gandhi family’s acquisition of the premises worth thousands of crores, using Congress party funds to pay off its debts, even though the publisher has real estate assets.
Subramanian Swamy filed a case against then Congress chief Sonia Gandhi and her son Rahul Gandhi in 2012, alleging irregularities related to a loan of Rs90 crore given by the Congress to the AJL.
MORE REPORTS